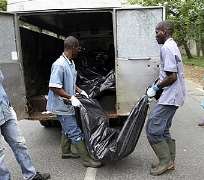 The international war crimes court said it would investigate post-election killings and rapes in Ivory Coast, raising the prospect that forces from both sides of the conflict could face trial.

ICC judges said on Monday they would allow the prosecutor to open an investigation, marking the Hague-based court's seventh formal investigation. All of its probes have so far been in Africa. It has issued an arrest warrant for Libya's Muammar Gaddafi.

"Everyone who committed violence must be prosecuted in order for there to be reconciliation," said Gnenema Coulibaly, Ivory Coast's Minister of Human Rights and Civil Liberties.

Gbagbo refused to cede power to Ouattara following the November 28 election, triggering months of violence and economic havoc in the West African country before Gbagbo was captured in April in Abidjan.

The former leader is being held in the north of the country. Ouattara said last month he would be tried in Ivory Coast for "economic crimes" and also face justice at the ICC.

Gbagbo's supporters have complained that no member of Ouattara's camp has been arrested, despite evidence of abuses by the former rebel troops.

"We just hope that the ICC conducts its work independently and transparently, as we have always rejected 'winner's justice'. We are hopeful and we are calm," said Sylvain Ouretto Miaka, interim head of Gbagbo's party, the Ivorian Popular Front.

The party also called on the ICC to investigate the 1999 military coup and 2002-03 civil war that sought to depose Gbagbo, but the court only has jurisdiction to investigate crimes from 2002, the year it was established.

PREVENTING VIOLENCE
Moreno-Ocampo has said at least 3,000 people were killed and 520 people were arbitrarily detained in the violence, while there were more than 100 reported cases of rape.

Ivory Coast last month launched a South African-style truth and reconciliation commission to try to heal the wounds of a conflict that drove a million people from their homes.

"Healing and reconciliation are complex issues, but impartial trials and holding to account the alleged perpetrators on both sides can make a vital contribution to reviving a respect for the rule of law," Keppler said.

In a statement, the prosecutor said the decision to open an investigation "ensures justice for victims" and he will present a list of suspects to ICC judges as soon as possible.

Taking into account the "volatile environment" in the Ivory Coast, the court also said the prosecutor would have a mandate to investigate crimes that might take place in future.

The 2010 election was supposed to draw a line under the 2002-2003 civil war, which split Ivory Coast into a government-held south and rebel-held north.

Ivory Coast has already accepted the jurisdiction of the court and Ouattara wrote to Moreno-Ocampo in May asking the ICC to investigate reported abuses.

The court has also asked the prosecutor to provide within one month any information on crimes committed between 2002 and 2010, potentially widening the scope of the investigation.

Ali Ouattara, president of the Ivory Coast Coalition for the ICC (CI-CPI) which monitors the court, said he regretted the initial limited scope of the investigation.

"The Ivory Coast was a theatre of violence long before the 2010 elections and victims of crimes committed during the civil war ... have received few answers to date," he said.