CAN I GO ON HAJJ IF I HAVE OUTSTANDING LOAN OBLIGATIONS TO PAY? 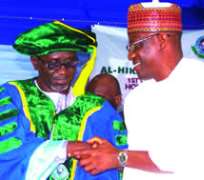 This year I am planning to perform Hajj (inshallah) with my parents. I came to know that before going to Hajj, you have to pay back all types of loans. Two years ago, I have purchased a vehicle with some down payment and remaining amount is agreed to pay by monthly installments in five years. At this stage, the value of the vehicle is about 30 per cent higher than outstanding loan i.e. if I sell the vehicle now (or any time), the sale price can pay back the total outstanding loan (installments) plus some amount in cash.

My question is, since the vehicle value is much more than the outstanding loan, can I go to Hajj without paying the outstanding vehicle loan (and continue paying the monthly installments) or I need to sell the vehicle to pay back the vehicle loan. As per my understanding, this loan is the form of 'Cash in Hand' (in case something happened to me during Hajj period, my loan can be paid off easily by selling the vehicle). Am I right? The main reason I want to perform Hajj at the earliest is that I have to take my parents for Hajj and they are getting older and older and I do not want to lose the chance this year (inshallah).

As an extra precaution it would be better for you to inform your inheritors of your debts and write a bequest stating all your debts.

If one is going on a Nafl Hajj then it's more important for him to use that money to pay off his debts rather than go on Nafl Hajj. I have heard through people that it is necessary to get married before performing Hajj, is this necessary that one should be married before going for Hajj. Please guide me in this regard and advise that what Hadeeh of Prophet (PBUH) is on the person who don't have any debt on it and also have sufficient amount of money and he don't go for Hajj…

It is not necessary to get married before performing Hajj. You should convey this answer to the people who you heard say to the contrary. The Prophet has encouraged us to rush towards Hajj and not delay it when it becomes compulsory on us. In fact, as a severe warning to those who unnecessarily delay their Hajj, the Prophet mentioned that, if they wish, they may die as a Jew or a Christian. This does not mean that the Prophet gave such a person an option to die as one of the two. Rather, it is a form of speech to show extreme displeasure and a stern warning. From this, one should understand the severity of unnecessarily delaying his/her Hajj.

Please advise, what is the proper way to make your niyah when intending to go for Hajj? Is it sufficient to say out loud that you intend to go on Hajj?

Intention is from the heart. If one has the intention to perform Hajj in his heart, that is sufficient. He does not have to verbally state his intention. However, one of the conditions of entering into the state of Ihram is to verbally mention the talbiya.

I would like to know about the different types of Hajj. When can a person perform those Hajj? What are their durations? I heard one can perform the Hajj even in 5 days. Is it true? Please let me know. Jazakallah

The days of Hajj are five: from the 8th of Zul-Hijjah to the 12th. There are three types of Hajj: Ifraad, Qiraan and Tamattu.' In Ifraad, one only performs the Hajj, not Umra. In Qiraan and Tamattu' one performs both the Umra and Hajj.

The only difference between Qiraan and Tamattu' is that in Qiraan one performs both the Umra and Hajj in one Ihram, whereas in Tamattu' after performing the Umra one changes the Ihram for Hajj. The best type of Hajj is Qiraan then Tamattu' then Ifraad (Durr Mukhtaar, vol. 3 pg 631 Darul Ma'rifa). Although visiting Madinah and the grave of the Rasulullah (Sallallaahu Alaihi Wa Sallam) is not part of Hajj, but it is highly recommended to do so due to the ahaadith in this respect, such as the ones below:

Ibn Umar (Radiyallahu Anhu) narrates that Rasulullah (Sallallaahu Alaihi Wa Sallam) said, 'He who performs Hajj then visits my grave after my death is like one who has visited me in my life.'