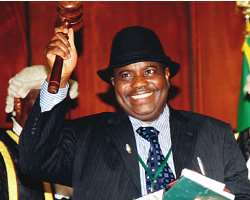 SPEAKER OF THE HOUSE OF REPRESENTATIVES, HON. AMINU TAMBUWAL
Listen to article

ABUJA, SEPTEMBER 28, (THEWILL) - Speaker of the House of Representatives, Hon. Aminu Waziri Tambuwal on Wednesday approved the appointment of additional chairmen for committees earlier inaugurated, as well as five other committees needed to complete the total 85.

Tambuwal had, on September 14, appointed chairmen for 80 of the 85 House committees. But he declined to announce heads the remaining five, albeit the name of certain lawmakers had been pencilled down. The new chairmen are Hon. Muktar Garba, for the Army; Abike Dabiri-Erewa, for Diaspora; and Jumoke Okoya-Thomas, for public procurement. Others are Hon. Aminu Shehu Shagari, for Judiciary; and Hon. Marouf Akinderu Fatai, for Legislative compliance.

Also, the House had, on Monday, approved the five new committees created by the Selection Committee. The new committees are Freedom of Information Act (FOI) and Reform of Government Institutions; Treaties and Protocol; Local Content; Federal Road Safety Commission (FRSC); and Lake Chad.

The committees are expected to be inaugurated simultaneously later on Monday. Already letters have been sent out to the various ministries, departments and agencies of government to attend the ceremony, which would be conducted in the plenary.