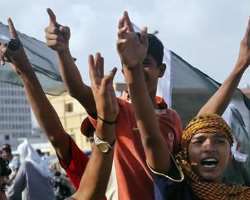 Washington has just about had it with Pakistan.

"Turns out they are disloyal, deceptive and a danger to the United States," fumed Republican Representative Ted Poe last week. "We pay them to hate us. Now we pay them to bomb us. Let's not pay them at all."

For many in America, Islamabad has been nothing short of perfidious since joining a strategic alliance with Washington 10 years ago: selectively cooperating in the war on extremist violence and taking billions of dollars in aid to do the job, while all the time sheltering and supporting Islamist militant groups that fight NATO troops in Afghanistan.

Pakistan has angrily denied the charges, but if its critics are right, what could the explanation be for such duplicity? What strategic agendas might be hidden behind this puzzling statecraft?

The answer is that Pakistan wants to guarantee for itself a stake in Afghanistan's political future.

It knows that, as U.S. forces gradually withdraw from Afghanistan, ethnic groups will be competing for ascendancy there and other regional powers - from India to China and Iran - will be jostling for a foot in the door.

Islamabad's support for the Taliban movement in the 1990s gives it an outsized influence among Afghanistan's Pashtuns, who make up about 42 percent of the total population and who maintain close ties with their Pakistani fellow tribesmen.

In particular, Pakistan's powerful military is determined there should be no vacuum in Afghanistan that could be filled by its arch-foe, India.

INDIA FOCUS
Pakistan has fought three wars with its neighbor since the bloody partition of the subcontinent that led to the creation of the country in 1947, and mutual suspicion still hobbles relations between the two nuclear-armed powers today.

"They still think India is their primary policy," said Talat Masood, a retired Pakistani general and prominent political analyst. "India is always in the back of their minds."

In an interview with Reuters on Tuesday, Pakistani Prime Minister Yusuf Raza Gilani - unprompted - complained that Washington's failure to deal even-handedly with New Delhi and Islamabad was a source of regional instability.

Aqil Shah, a South Asia security expert at the Harvard Society of Fellows, said Islamabad's worst-case scenario would be an Afghanistan controlled or dominated by groups with ties to India, such as the Tajik-dominated Northern Alliance, which it fears would pursue activities hostile to Pakistan.

"Ideally, the military would like Afghanistan to become a relatively stable satellite dominated by Islamist Pashtuns," Shah wrote in a Foreign Affairs article this week.

Although Pakistan, an Islamic state, officially abandoned support for the predominantly Pashtun Taliban after the 9/11 attacks on the United States in 2001, elements of the military never made the doctrinal shift.

Few doubt that the shadowy intelligence directorate, the Inter-Services Intelligence (ISI), has maintained links to the Taliban that emerged from its support for the Afghan mujahideen during the 1979-1989 Soviet occupation of Afghanistan.

Until recently, there appeared to be a grudging acceptance from Washington that this was the inevitable status quo.

That was until it emerged in May that al Qaeda leader Osama bin Laden - who was killed in a U.S. Navy SEALs raid - had been hiding out in a Pakistani garrison town just two hours up the road from Islamabad, by some accounts for up to five years.

Relations between Pakistan and the United States have been stormy ever since, culminating in a tirade by the outgoing U.S. joint chiefs of staff, Mike Mullen, last week.

Mullen described the Haqqani network, the most feared faction among Taliban militants in Afghanistan, as a "veritable arm" of the ISI and accused Islamabad of providing support for the group's September 13 attack on the U.S. embassy in Kabul.

The reaction in Islamabad has been one of stunned outrage.

Washington has not gone public with evidence to back its accusation, and Pakistani officials say that contacts with the Haqqani group do not amount to actual support.

However, Imran Khan, a Pakistani cricketer-turned-populist-politician, said this week that it was too much to expect that old friends could have become enemies overnight.

He told Reuters that, instead of demanding that Pakistan attack the Haqqanis in the mountainous border region of North Waziristan, the United States should use Islamabad's leverage with the group to bring the Afghan Taliban into negotiations.

"Haqqani could be your ticket to getting them on the negotiating table, which at the moment they are refusing," Khan said. "So I think that is a much saner policy than to ask Pakistan to try to take them on."

REGIONAL GAME
The big risk for the United States in berating Islamabad is that it will exacerbate anti-American sentiment, which already runs deep in Pakistan, and perhaps embolden it further.

"The real game is unfolding on the ground with the Americans. The Pakistan army is betting that the United States does not have too many choices and more broadly that the U.S. is on the decline, he said.

It is also becoming clear that as Pakistan's relations with Washington deteriorate, it can fall back into the arms of its "all-weather friend," China, the energy-hungry giant that is the biggest investor in Afghanistan's nascent resources sector.

Pakistani officials heaped praise on Beijing this week as a Chinese minister visited Islamabad. Among them was army chief General Ashfaq Kayani, arguably the country's most powerful man, who spoke of China's "unwavering support."

In addition, Pakistan has extended a cordial hand to Iran, which also shares a border with Afghanistan.

Teheran has been mostly opposed to the Taliban, which is dominated by Sunni Muslims while Iran is predominantly Shi'ite. But Iran's anti-Americanism is more deep-seated.

"My reading is the Iranians want to see the Americans go," said Raja Mohan, the Indian analyst. "They have a problem with the Taliban, but any American retreat will suit them. Iran in the short term is looking at the Americans being humiliated."

ARMY CALLS THE SHOTS
The supremacy of the military in Pakistan means that Washington has little to gain little from wagging its finger about ties with the Taliban at the civilian government, which is regularly lashed for its incompetence and corruption.

"The state has become so soft and powerless it can't make any difference," said Masood, the Pakistani retired general. "Any change will have to come from the military."

Daniel Markey, a senior fellow for South Asia at the U.S. Council on Foreign Relations, said the problem lies with a security establishment that continues to believe that arming and working - actively and passively - with militant groups serves its purposes.

"Until ... soul-searching takes place within the Pakistani military and the ISI, you're not likely to see an end to these U.S. demands, and a real shift in terms of the relationship," Markey said in an online discussion this week. "This is the most significant shift that has to take place."