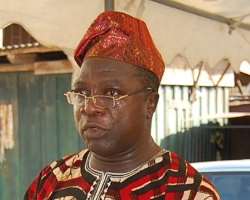 More evidently than Nigerians could ever imagine, the political atmosphere has now remained conspicuously favourable to the Labour Party, this time around in Ondo State, as Dr Joseph Akinlaja, former Deputy National President of Nigeria Labour Congress (NLC) got the revalidation of his victory at the 2007 poll by Justice Abu Gunnel of the Court of Appeal in Benin.

Details of these judicial proceedings were culled from Ondo State official website to avail the public the opportunity of knowing another landmark judgment by the Nigerian judiciary. According to the information on the web:

He said LP's Joseph Akinlaja's petition was filed at the lower tribunal outside the time allowed by the Electoral Law.

Fawehinmi's counsel, Chief Bolaji Ayorinde (SAN), urged the court to apply the provisions of Section 141 of the Electoral Act 2006 which forbids late filing of petitions.

Opposing the application, Akinlaja's lead counsel, Dr. Olumide Ayeni, said the Form EC8E obtained by his client pursuant to the tribunal's order and certified by Independent National Electoral Commission (INEC), showed that the result was declared on April 22, 2007.

He said since all parties agreed that the petition was filed on May 21, 2007, the petitioner complied within the 30 days as provided by the law.

Refusing the application, Justice Gunnel said: "In the final analysis, I consider this application unmeritorious; all the prayers suffer the fate of failure. This application in its entirety is accordingly dismissed."

He awarded a N30,000 cost against Fawehinmi.
Similarly, the appellate court refused a motion by the former Speaker of House of Assembly, Bakkita Bello, seeking to raise the issue of late filing of petition by LP's Adebisi Olusegun.

Bello's counsel, Mr. Ifedayo Adedipe (SAN), filed an application praying the court to decide the case against Olusegun on the grounds that he did not file the petition as provided by the Electoral Act, 2006.

Olusegun's counsel, Dr. Olumide Ayeni, showed the court a Form EC8E that the result of the election was declared on April 15, 2007 while the petition was filed on May 14, 2007 which was still within the 30 days period.

He showed the court the discrepancies in the original and duplicate of the Form EC8E produced by Bello, bearing April 14, 2007 as the day the election result was declared and two names of the same candidate.