HOW ANAMBRA IN KANO HONOURED THEIR OWN 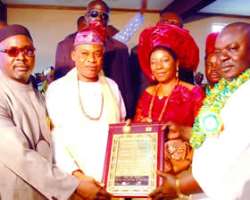 September 10, 2011, will remain evergreen in the minds of Anambra State indigenes resident in Kano State under the aegis of Anambra Community Association (ACS). It was a day they rolled out the drums to honour their deserving sons.

The occasion was convened in honour of Ikenga Alphonsus Osinachi Ubaneche, Chief Obi Adimora and Chief (Alhaji) Abdullahi Ndidi Obinwa, who were conferred with the honour of patrons of the association. The three men, by the estimation of members of ACS, had contributed hugely towards the wellbeing of Anambra people in the state. The event, they said, was just their own way of showing appreciation and recognition to them.

Unarguably, the event was a success. It was a simple family gathering, which ended as one of the most flamboyant gatherings of Ndigbo in the state. Apart from the cocktail of attendees, including a number of titled men and their wives, several other segments of the Igbo society in the state made it a point of duty to celebrate with them. The guest list included the Onye Ndu Ndigbo in Kano State, Igwe John Chiejina Nnaji; the leadership of the Igbo Community Association (ICA) in the state, members of Ohaneze Ndi Igbo, Kano State chapter, and some other communities in the state.

There was enough to eat and drink and kola nuts to spice the day. Expectedly, various women groups that attended the occasion dressed in their glitzy attires, sparkled as they sang and danced. They complimented the rest of the cultural troupes that added spice to the occasion and for as long as the event lasted, the joy and excitement of Anambrarians, living in the city knew no bounds.

The speeches were few but touchy. Many people spoke in support of peace and unity. They all wanted the distressed umbrella body of the Igbo leadership, ICA, in Kano State, which has since broken into splinter groups, to come back to reason, embrace peace and speak with one voice.

In his remark, Ikenga Alphonsus Osinachi Ubaneche expressed appreciation for the honour done to him and tasked Ndigbo in Kano to embrace peace and unity, adding that without peace, progress would elude the community. On the contrary, he expressed bitterness at the waste of resources as a result of the subsisting cases in court and in various police stations in respect of the Igbo leadership crisis in the state. He said those resources could be deployed to more useful causes such as the award of scholarships and soft loans to Igbo sons and daughters through a foundation.

'We should, therefore, continue to conduct ourselves in such a manner that will protect our dignity and respect. Today remains one of the memorable days in my life. I feel highly honoured. There could have been better people than I but I'm humbled by this recognition and I want to say that I will do my best for not only the Anambra people but the Igbos in Kano.'

President General of Anambra community in Kano, Chief Ugo Reginald Ozoemena, said the day was a special day for all the people of Anambra State at home and in the Diaspora, since it brought about the coming together of all the sons and daughters of the state in Kano State, including those who were aggrieved but were appeased by the conduct of a general election that was acceptable to all.

Also speaking on the occasion, Igwe John Chiejina Nnaji, Onye Ndu Ndigbo in Kano, said he was pleased with the way and manner Anambra people had conducted themselves. 'It may not be an over statement to say that the Anambra community remains the most organised community among the Igbo-speaking states in Kano; members of my cabinet and I are happy with them.'

'We ask them to keep it up as I urge other communities to emulate their good conduct,' he said, adding that peace had returned to the Igbo community in Kano. 'The Igbo race is peace loving. Although there is no community devoid of crisis, I want to say that we are doing everything possible to ensure peace in all our communities and peace has really come to stay,' he said.

Also the Ohaneze Ndigbo in Kano, through its president, Chief Tobias Michael Idika, urged other Igbo communities in the state to emulate their Anambra brothers and sisters. He charged them to engage their time and resources in ventures that would benefit mankind and bring about development to their communities.