People Always Say I Have Nothing To Offer -Charles Novia 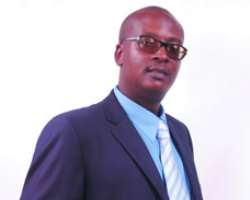 Charles Novia is a movie producer and acclaimed scriptwriter. His name, at different times, conjurs brilliance, controversies and achievements in Nollywood.

In his kitty are Redeemed Christian Church of God (RCCG) - sponsored blockbuster, Covenant Church, Missing Angel and Caught in the Middle among others.

A usually cool and unassuming but very professional producer, who is responsible for the success of some players in the Nigerian movie industry like Desmond Elliot, Empress Njamah and Grace Amah, is doing new things.

In this interview with Gbenga Bada, he spoke on issues ranging from his reality TV show Majek Fashek, who is on his music label, November Records, here in Nigeria.

Is it true that you have struck a bond with Majek Fashek despite all that is going on in his life?

He is the most misunderstood person. People think he is crazy and that he is on drugs. I want to get the story of Majek Fashek out to the people. Many people don't know that Majek Fashek is just one man that never dies and has so much to give. He's like our own hero, who has placed Nigeria on the world map and those things I see in him can never be discouraged by what people say about him. People don't just understand who and what that man stands for. Majek should be celebrated and treated as a hero, somebody somewhere has to be there for him and that is why I have taken it upon myself to do this. He might have his own downfalls but for me, he is a magnificent musician, who would continue to serenade people with good music if given the opportunities. He would always fall like a human and rise again unlike some of the people we have around. All he needs is love from everyone. We are going to show all that in a movie, which will be shot on celluloid.

Why have you decided to be on the sidewalk of Nollywood?

I take my time these days. I'm an advocate of Nollywood's achievement but I think we have lost direction because we've allowed stupid interest, especially from the marketers to override genuine business intentions. These so-called marketers started the industry, invested in the industry but they are also killing the industry. The reputation of storylines and the over usage of actors have made people less enthusiastic about us. The buying public is weary; they are tired of seeing the same storyline and the same faces. I don't have anything against these actors, but I think the so-called big actors are overused. No Nigerian actor can stand to say I've done 500 movies that are outstanding. It is only two to three movies they've done that are outstanding. Now, several people who belong to the middle class are now in the league of millions of people who go to Silverbird Galleria to get the worth for their money.

Is this the reason for your venture into reality TV show?

Yes, because these are the ones who will take over the industry because their taste is high. These people need to see new and fresh ideas, new storylines, new faces, new talents, and new breakthroughs in cinematography. It is not about shooting the movie in 10 days but it's about getting the right distribution outlet and getting people to appreciate those talents. For me, we are on the look out for new faces, new talents, fresh and talented people who are hungry to do what they are passionate about and love. We need new people, new faces, new movies.

You are known to have always gotten new stars from your movies, why trying to make a reality TV show instead of making a movie?

Over the years I have always been hardworking and I bring out talents. I could remember when I was young, I had so much talent but there was no one to encourage me the way I wanted it to be. When I grew up, I found out that those opportunities are still there and I decided to take them up as a challenge. I see a lot of people out there everyday and they just don't know how to get into the pool where their talents can be refined to something that could attract the public. I thought of a way of helping these people, and that has given birth to this reality TV show, which is tagged Charles Novia Screen Test.

How would you describe your reality TV show?

Well, it's another one coming from Charles Novia. It's not an easy thing and I know ideas are all over the world with no particular one original. But this is needed to help resuscitate the dying state of Nollywood. The reality TV show would have people that have natural dramatic instincts in them coming out and showing themselves in a dramatic forms and a realistic series and that is why I call it a 'dramality' show. It would not be right at this point to compare or say why it is going to be different but one thing that I'm certain about is the ability and competence of my production outfit to do something different. In this state, you would be seeing Charles Novia in all forms of nomenclature. I would be giving these young lads a platform, training and opportunity, which they would remember and cherish in several years to come. I want to look at myself and be confident to say that guy or lady signing an endorsement came to professionalism as a result of my help and push or that the person is my protËgË.

Is it all about doing a show or what really is the essence for you?

Without being fictitious, we might have like two million Nigerians or less, who are willing and are aspiring to become the next big thing in Nollywood but they don't have the chance, so if I can get just 25 people to train, I know in the next two or three years, those 25 would also impact directly or indirectly on the ambition of some other people. I have found out that the Nollywood we have today is all comedy, there is no more arts in the profession and what I'm trying to do is bring back the art into the job. The public is already complaining about the videos and now people have to go back and get their acts together in order to help them give the people worth for their money. Now everyone is waiting for the next blockbuster; this would not be possible without good production and getting their art right. The actors and actresses have to be new on the scene. That's what I'm looking out for. They must also be talented; that's a factor. At the end of the day, we should all look forward to a fresh generation of talents, who will be box office hits in Nollywood in a matter of time.

How are you planning to fund the project yourself because there are speculations that you don't have any sponsor at the moment?

What is actually required to stage such a reality TV show involves $1 million and that is equivalent to over N100 million, and, at the moment I've not got a dime. We've got no sponsors and if I tell you that what we need to actualise this project is several millions of naira, you would wonder what I'm talking about, but this is just what it is. For those who have always known me, whatever I set my mind to, I do and I'm set to ensure that I do this and impact on the lives of those that would be affected and also make the dreams of some people come true. This is because they truly have the talent and over the years, with the talents I have been able to discover, I can tell you that this would reveal more talents who would make blockbusters in Nigeria.

How do you distinguish those with the love of the art from those who are just in it for the fun?

Training is what separates the men from the boys. I've heard some of them say, 'I am talented, I don't need to go to acting school.' That is all crap. Even in Hollywood people still go for drama lessons. But here, everybody thinks he can act. To see more of these, let's see people who would go to the National Theatre and do a stage play, which has all the intrigues and tricks of who really is a good actor or actress.

Why do you think people always write you off and sometimes think you are nuts?

People always write me off saying I have nothing to offer again but each time I come out with something they can't stop talking about it. God is the one that dictates what I do. I'm an entertainment entrepreneur right now. I'm involved in a school on movie making, it is known as Novia Academy for Cinematography and Dramatic Acts. The students are some people that would emerge from the reality TV show and together make a good movie with all the 25 budding actors and actresses.