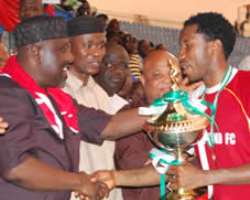 Heartland FC of Owerri, yesterday, defeated Enyimba FC of Aba 1-0 to lift the 2011 Federation Cup at the Teslim Balogun Stadium in Lagos. Chinedu Efugh's scrambled goal in the closing seconds of the first half was all that Heartland needed to break the 23-year old jinx in the competition.

The Heartland skipper showed grit and awareness to direct the ball home on the line as Enyimba failed to deal with an excellent free-kick into its area. Heartland's last triumph was in 1988, when the competition was called the Challenge Cup.

For Enyimba, it was a heartbreaking moment for the second year on the spin, after it lost to Kaduna United in last year's final.

The club thus, became the champion of the oldest soccer competition in the country in its 66th edition. It was first known as All Nigeria Governor's Cup and thereafter, the Challenge Cup, the Coca Cola FA Cup and now the Federation Cup.

Earlier in the day, Nigeria Premier League (NPL) side, Ocean Boys, claimed the losers' final of the 2011 Federation Cup. The 'Divine Warriors' defeated city rival, Bayelsa United 7-6 on penalties after 2-2 at regulation time.

Martins Okpose got the lead for Bayelsa United inside 10 minutes before the impressive Emmanuel Enize got the first of his brace 11 minutes later. Enize turned his marker inside out to side-foot pass Femi Thomas in goal for Ocean Boys. And within six, Enize at the far end, touched the ball into an open goal after a low cross from Eddy Ongolo on the left channel. But Bayelsa United's captain, Tarilaye Nwankwe, converted from the spot to put both sides on even terms.

Ongolo made sure Ocean Boys won the losers' final at the expense of its rival.