NATO INGNORED THE MOST VULNERABLE IN LIBYA 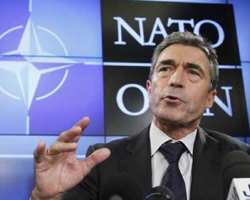 It took a prominent and unrelated Margaret Thatcher to passionately cry out Kosovo. In Libya, the most vulnerable people are the African natives, African migrants, and those using Libya as transit to cross the desert to Europe. Each of these groups has skin color and a long African-Arab brutal relationship in common. Gatdhafi claimed to be the king of African kings in solidarity with African Union as he used them to enhance his status, enrich himself and his Country. There is no doubt that he used some of these Africans as loyal bodyguards as other Arabs and Berbers. The difference is while others could switch sides, Africans are stuck even if they backed the NTC, National Transitional Council.

People of goodwill should be exposed to the atrocities going against both African native and migrants in Libya. The reason NATO continues to ignore the plight of these black native and foreign African people is simple. NATO politicians had billions of dollars in bilateral deals with Gatdhafi in fear of African migrants invading the shores of Europe. It was based on Gatdhafi threat to open the floodgate for Africans. The fact is, of all Africans travelling to Europe those passing through the inhospitality of Libyan Desert was less than two percent. The Europeans are even more afraid of North Africans and their religion posing bigger threat to their own culture and religion. So Both Gathafi and NATO had symbiosis relationship.

Gatdhafi is out of power and Europeans worst fear has not materialized, yet NATO still deny African native Libyans and migrants the same civil right they claim they are fighting for. Both sides in Libya civil war have targeted Africans migrants and cross border job seekers, some of whose journey have been disrupted as mercenaries while NATO and other Arab citizens were called freedom fighters. Let Gathafi treat NATO citizens like African mercenaries, Libya will sink. All evidence needed have been displayed on public media with gruesome killings, maiming and detentions in sub human conditions of Africans since many more are too scared to venture out to look for food and water. In many cases, they have to send their landlords or employers to buy them food.

Most Americans and Europeans will not stand by and watch this ugliness on television without protesting to their governments. Some African countries have; and Nigeria has passed into law the National Human Right Commission Amendment Act (2011), Legal Aid Council Amendment Act (2011) and Freedom of Information Act (2011). Libya is not a signatory to Geneva Refugee Convention and like other African countries, Libya has no regard for human rights.

More evidence is coming out of women and underage girls being raped in front of their families and the fathers taken away. If these brutalities are happening to non-Africans, of course there would be immediate daily world outcry on major TV news channels. We must appreciate field reporters of major press and networks bringing this inhuman tragedy to our attention. It is all they can do; it is up to their bosses and editors to make them available to the public more often as they want.

Once all Libyans were given guns to fight, some turned on the locations of Africans demanding their foreign currencies and taking those that resisted away. Arabs and Berbers of North Africa have never been kind to Africans. Since slavery practiced all over the world became transatlantic, Africans suffer most. If some Africans think Christian slave trade was bad, Muslim slave trade was equally bad or worse if they look into their history. African Libyans still suffer from the vestiges of those days in Libya and their distaste for African migrants that were blamed for every domestic crime in Libya well before this civil war made it worse. Many Africans were locked up in prisons until the war broke out. Unlike other prisoners that were let out, Africans had nowhere to go.

Africans still remember the role of the Arabs in Kenya and Tanzania bombing that killed and maimed many people without apology or compensation from the home countries of those terrorists. We are witnessing diffusion into Nigeria where bombing has been used as a tool to turn innocent people into victims. We have now become causalities when we venture out of our Continent and casualties when we stay on our Continent. Africans remember Arab and Berber relationship in Africa history; and Libya is déjà vu. Songhai was one of the greatest African Empires that finally succumbed to the greed of Al-Mansur Moroccan Army in the 16th century to loot for treasures in slaves, ivory and gold to replenish their coffers after debilitating war with Spain and Portugal.

African leaders whose citizens are suffering in Libya also have their fingers deep in blood when some of their citizens begged not to be returned to home countries where there is no work for them but wanted to be sent to any place they can find any form of work. Nigeria, Ghana, Kenya and some African countries sent planes to bring them home, they got only those that could make it to the Airport. For most, the journey from their hide-out was too treacherous to even venture out to airports. Yet we have the right in any continent as long as we are natives and legal residents like others have in our Continent.

The accomplices of African leaders that created poverty in a continent full of human and natural resources showed their faces recently when we learned about France politicians collecting percentage of their loot from French speaking West African leaders. So those aiding and abetting African politicians to loot their poor countries are equally guilty of the plight of African children crossing Libyan Desert. France may overstay their welcome and when told to leave, might get bitter and even spiteful as in Haiti and Guinea. Haiti was forced in exchange for French recognition of its independence to mortgage its future to the French banks that bankrupted Haiti's ability to be prosperous until today.

Watch out! The National Transitional Council of Libya is promising introduction of democratic enhancement to make the OPEC member states more transparent. OPEC is neither a country nor their domain. Democracy as in Tea Party? The price for helping NTC is to break the cartel as they have always wanted with the help of the new Libya. For the first time ever, NATO countries could not dictate the price they buy from developing countries and they want to use Libya to change that.

The irony of all these is that without the support of United States, the rest of NATO could not be so effective. Yet none of the European countries, in spite of their selfish interest could be mindful that without the African American President, they will still be trying to get Gatdhafi out of Tripoli and Benghazi. It will be unwise for the President to come out openly to criticize his partners in NATO for ignoring Africans in Libya. The last time he spilled his gut reaction on police treatment of Professor Gate in Boston, he got into trouble for being so personally oversensitive.

Obama never gets credited anyway, even when he saved world capitalism from collapse. President Sarkozy of France and Prime Minister Cameron of Britain could not wait for the civil war in Libya to end, they ran there to claim victory and teach us how to help restore civil rights and democracy to a foreign country without getting bloodied and bugged down locally.