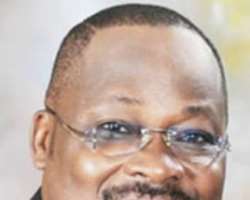 advertisement
The once chummy relationship between the Oyo state governor, Senator Abiola Ajimobi and the Olubadan of Ibadanland, Oba Samuel Odulana has broken down, no thanks to the chairmanship position of the state Traditional Council.

The cause of the seeming irreconciliable difference is the Alaafin of Oyo, Oba Lamidi Adeyemi who, until May 5, 2011 was the permanent chairman of the council.

The sixth assembly had on May 5 passed a bill amending the laws of the council which caused a rotation in the chairmanship position between the trio of Olubadan, Alaafin and the Soun of Ogbomoso, Oba Jimoh Oyewunmi.

But following his loss, Akala had  decided to pay back the monarch by signing the bill on the rotation of the chairmanship position of the traditional council with the Olubadan taking the first shot of two years after which it would be turn of Soun to head the council while Alaafin will head the council after four years, apparently, after the expiration of Ajimobi's tenure

The bill was subsequently signed into law by the former governor, Otunba Adebayo Alao-Akala and promptly gazeted the law. The law was seen from political quarters as a vengeance bill, to hit back at the Oyo monarch for ensuring the fall of Akala and his party at the April polls, especially the second term ambition of the former governor.

The Alaafin is threatening to withdraw his support for Ajimobi if he does not use his powers to reverse Akala. but Ajimobi risks losing a long time father figure and ally, the Olubadan, who is now the current chairman of the council. To appease the Alaafin, the Oyo Governor has asked a return to status quo until all avenues are exhausted in a bid to resolve the matter. This includes a suit instituted by the Alaafin challenging the rotation.

When the  Alaafin opposed the second term ambition of Akala ,President Goodluck Jonathan, met with  anti-PDP elements in Lagos ans appeled that they worked for the party and its candidates .

The monarch and other anti-Akala forces had insisted on a replacement for Akala and other candidates if they must support the party at the polls which Jonathan had snubbed, the resultant effect was the anti-Akala campaigns and sentiments by Alaafin during the electioneering campaign days.

The PDP and its candidates had lost heavily in Oyo and in Ibadan owing to what bookmakers described as punishment for the party for refusing to bend its rules and make amends at the time of the grievance of the party elders with the main structure of the party.

The Alaafin had fought back through his loyalists in the council of chiefs who met at the Oyo palace to reject the law and express their confidence in the Oyo monarch. The monarch also vowed to fight back, using the instruments of the law. However, as of the time of filing this report, there was yet to be a mention of the controversial chairmanship case before the courts in the state.

In the communiqué read on their behalf by the vice-chairman who is also the Olugbon of Ile-Igbon, Oba Samuel Osungbade, the monarchs said the “purported amendment cannot and will not stand the test of time,” remarking that the council had already noted over 10 fundamental errors in the said amendment which he explained the Alaafin would address the errors noted in due time.

Sources hinted that no sooner had Ajimobi assumed office had the Alaafin sent emissaries to him to restore his permanent chairmanship position of the council to which the governor had given his consent.  The governor, it was learnt had also met with some leading Ibadan elders on the vexed positon who had expressed divergent positions.

Pointblanknews.com further learnt that Owing to the reluctance of the governor to do the monarch's  bidding, the Alaafin rushed to the leader of ACN, Bola Ahmed Tinubu. The ACN leader also prevailed on Ajimobi to disregard Akala's new statute on rotation.. It would be the second of such monarch displeasure to the governor. The first was when the governor refused to appoint Alaafin nominee as the Secretary to the State Government {SSG}.

Promptly, Ajimobi had written to both the Ibadan and Ogbomoso monarchs, stopping further meeting of the council. During  a visit to the Ibadan monarch, the governor told the Olubadan  to stop parading himself as the chairman of the council until the resolution of the court case.

Ajimobi during the visit to Oba Odulana reportedly apologised to him on the step he took, but with an assurance that he did that not make the move to spite the royal father.

Sources hinted that Ajimobi, in the letter to the Ibadan monarch, intimated him that the council can no longer sit because of the case instituted by the Alaafin. It was gathered that Ajimobi took the decision which has not gone down well with the leading community leaders in Ibadanland in order not to further escalate the crisis within the council and not to ruffle feathers, most especially given the role played by Oba Adeyemi towards his election as governor of the state.

Pointblanknews.com  learnt that aggrieved natives of Ibadan shocked by the twist in the headship of the traditional council had made representations to those considered close to the governor which included the Aare Musulumi of Yorubaland, Alhaji Azeez Arisekola Alao and a former governor of the state, Senator Rasidi Ladoja, himself a high chief to prevail on him to withdraw the letter so as to save the face of the Ibadan monarch, given the fact the agitation for the rotation of the chairmanship of the council by the Ibadan people had been on for quite a long time.

advertisement
An inside source confided in   pointblanknews.com   that the governor had inundated the monarch and his high chiefs of his respect for the rule of law and hinted that since a case on the controversial chairmanship position is subsisting before the court, it would be subjudice for Olubadan to either head the council or parade himself as the chairman of the council.

The position of the governor had created political discuss in the state as the trio of the umbrella body of Ibadan indigenes, the Central Council of Ibadan Indigenes {CCII}, the PDP and the ruling Action Congress of Nigeria {ACN} treaded different paths on the issue.

In his reaction, the Publicity Secretary of the Action Congress of Nigeria (ACN), Mr. Mathew Oyedokun, chided the PDP for what he called the party's “inflammatory, divisive and Machiavellian politics” which he said was aimed at pitching the Ibadan people against themselves and making their foes of yesterday their “emergency friends.”

However, the National Publicity Secretary of the CCII, Oluwaseye Babatunde Ogunsina said  “As far as we are concerned, the kabiyesi had assumed the chairmanship position of the council and there is nothing anybody can do about it. We are aware in the CCII that the case is before a court but no court has made any pronouncement and so the Olubadan by law still remains the chairman of the council. The law made by the sixth assembly being the highest law making body for the state is yet to be vacated and nobody by any fiat either executive or personal can vacate it. The only body that can vacate it remains the court."

The PDP in the state said that it is amused at the unfolding drama in the traditional council in the state, describing the scenario and accused Akala of showing disrespect to the Olubadan institution.

PDP Director of Media and Startegy, Morohunkola Thomas remarked in a chat with Pointblanknews.com  “the PDP is aware that the governor is acting on the directive of his political masters based in Lagos. It is however ironic that what Alao-Akala an Ogbomoso man did to respond to the long-term demand of the people of Ibadan, Ajimobi an Ibadan man has come to upturn it for political exigencies."