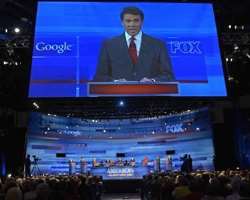 Republican Rick Perry took heavy fire from his rivals over a Texas policy that aids illegal immigrants at a presidential debate on Thursday where he struggled to protect his front-running position.

Texas Governor Perry attempted to change the narrative from two previous debates, where he came under fierce attack from former Massachusetts governor Mitt Romney and other candidates.

But his competitors accused Perry of coddling illegal immigrants with a Texas policy to allow their children to gain education tuition assistance.

"I would not allow taxpayer-funded benefits to illegal aliens or for their children," said Minnesota Congresswoman Michele Bachmann. "That's a magnet. End the magnets for illegal aliens to come into the United States of America."

Other candidates took shots at Tea Party movement favorite Perry over illegal immigration, one of the few issues where he belies his reputation as a staunch conservative.

Perry is ahead in polls of Republicans but his lead is fragile over Romney, who is the choice of many mainstream Republicans. A USA Today/Gallup poll on Wednesday found Perry leading Romney 31 percent to 24 percent among likely Republican voters.

No knockout blows were struck at the debate, and Perry again appeared to flag as the two-hour gathering wore on. A focus group of voters assembled by a debate host, Fox News Channel, declared Romney the winner.

Perry revived old charges that Romney has flip-flopped on key issues from healthcare to education.

DEFENDS TEXAS PROGRAM
Perry said that as governor of a state with a long border with Mexico, no one had worked harder than he has on border security. He fiercely defended the program as correct for his state, saying to do nothing would leave the immigrant children as a burden.

To those who oppose it, he said, "I don't think you have a heart. We need to be educating these children because they will be a drag on our society."

Republicans increasingly see a good chance to oust Obama from the White House with the U.S. economy struggling to rebound from 9.1 percent unemployment and chronic debt and deficits.

On a day the stock market plunged on fears of renewed recession, the U.S. economy was the top topic and all the candidates promised conservative prescriptions of low taxation and limited regulation to fix it.

The Republicans declared Obama's economic leadership a failure, a point that lesser-known candidate Gary Johnson underscored with a jab that drew guffaws from the audience.

Perry again was forced to defend a Texas policy he ordered to vaccinate adolescent girls against sexually transmitted diseases, but this time he had an answer that attempted to tug at voter heartstrings.

Perry got in plenty of shots at Romney, accusing the former Massachusetts governor of backing an Obama administration education reform known as Race to the Top, and favoring the White House's healthcare reforms.

But Romney managed deft counterpunches and took a high-minded position by declaring Republican candidates may bicker over issues but are united in their goal. He would not repeat a comment he had made in an earlier interview that Perry was not electable.

"Governor Perry and I disagree on some issues," he said. "But one thing's for sure, we all agree that President Obama needs to be former President Obama and we're going to make that happen."