SOYINKA AND THE OGUN EXAMPLE 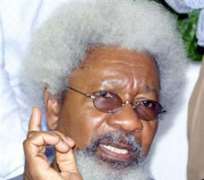 Soyinka
I am not a priest in the temple of the arts. At best, I am an occasional communicant in that temple. I avoid altogether the visual aspect of the arts, namely fine and applied arts. As for its non-visual arm, I choose and pick. I like the performing arts but I am mostly enamoured by the literary arts. And so, it is in the literary arts, especially the creative writing genre, that I find Soyinka a jewel of inestimable value.

Occasionally, my heart is filled with trepidation. Prof Wole Soyinka is not growing younger. Who takes over when he leaves the scene at the age of 120, as I have pronounced? When you recall that as at 1980's, Prof Chinua Achebe had cast a reflection on the quality of written and spoken English of university professors in Nigeria, then you simply wonder what must be the situation today. I was told recently that a job recruitment consultant lamented that a First Class university graduate could not spell the word 'graduate' correctly.

Even those who should be men of letters would shock you to the marrow when they write or speak. And the grammatical howlers that daily assail us in the electronic (unfortunately during the news hour) and print media reveal not just the hackneyed 'fall in the standard of education' but the complete collapse of the sector.

But let there be no misconception here. When I speak about Soyinka, it's not really much of his acknowledged high level of oral or written proficiency in English. I speak of Wole Soyinka's fecundity of mind and profundity of thoughts. Soyinka's works - a word I prefer to writings - are always perfumed with graphics, illustrations and resonances. WS is a wordsmith, a master craft and thinker.

I never pretend to fully apprehend Soyinka once. Any perfunctory reading of the Nobel prize winner is an exercise in vain. I read and eat his works with a dictionary by my side. No, I do not lose a single word or sentence. And I recommend this arduous approach to those who genuinely wish to better their minds.

Let me take samples from (the first part of) his latest offering titled, 'Teetering on the democratic trampoline', a keynote address he delivered at the recent conference of the Nigerian Bar Association (NBA) in Port Harcourt, Rivers State (The Nation, August 26, 2011).

'Some wounds dig deep into the human psyche, and continue to suppurate long after they were inflicted. Such, in my case, was the trial and execution of my late colleague and friend, Ken Saro-wiwa…'

'As with most other dramatis personae - direct or merely peripheral - of that painful drama, closure remains a destination much desired. I do not think we shall attain it at any one encounter but, lancing the tumour of evasion and letting out the scab covered pus of Truth is one way of inching closer to that moment of closure.'

'Today - and I speak of immediate, ongoing events - the problems of Law, and the challenges to her ministers are vastly different, but the implications for society remain the same - a severe drought on the judicial landscape, a deficit in public confidence, a questioning of the very viability of the legal recourse. It goes beyond a House divided against itself, asks whether the Citadel of Law has ever been much more than a long sustained mirage whose promise as a shimmering oasis of justice has finally evaporated.'

In spite of the contradictions in our society, Ogun State, under the new leadership of Governor Ibikunle Amosun, seems to be charting a new course towards the ideals of Democracy.

The thick line which hitherto existed between the government and the governed has, since the inauguration of the new administration on May 29, 2011, been growing thin and moving speedily towards obliteration.

I speak of a governor, who, while on tours or visits around the state, spend most of the time trekking, exchanging pleasantries and banters with the ordinary citizens - market women, vulcanisers, auto-electricians, palm oil sellers, just name it! - listening to their demands, promising when and how government will meet them. Indeed, without any attempt at blandishment, it appears Senator Amosun is gradually becoming the embodiment of the Civic Will in Ogun State.

And make no mistake about this; Governor Amosun believes he is only the captain of a ship. He has brought on board a formidable team, which includes people that are not even remotely known to him.

I agree with the view that if the government succeeds, it is the party - the ACN - that succeeds. But then what do you expect from a cabinet that consists of democracy fighters like Dr Olaokun Soyinka and Mrs Hafsat Abiola-Costello?

At last, one can shut the mouths of those who insinuate the dynasty theory. Wrote Dr Kayode Fayemi, now governor of Ekiti State, in his book, Out of the Shadows: Exile and the Struggle for Freedom & Democracy in Nigeria, published in 2005, '…in many ways, Olaokun Soyinka remains, for me, one of the many unsung heroes of our struggle. Inevitably, the fact that he is Wole Soyinka's son overshadowed his excellent contributions to the struggle - his strategic planning skills, publishing experience, effective behind-the-scene role and his untrammeled dedication to the struggle. Very few people knew how much professional and material benefit he sacrificed to keep many aspects of the work going and even now, he has continued to lead a quiet life since his return to Nigeria.'

It is therefore to the credit of Senator Amosun and the Deputy Governor, Prince Segun Adesegun, to have brought a man with such a consuming passion for democracy into the cabinet. In the same authoritative narration of Dr Fayemi, we have Hafsat Abiola mentioned among other democracy icons that fought the military to a standstill.

Women like men are not in short supply in the team of Governor Ibikunle Amosun. Mrs Olufunso Amosun is amiable, unassuming, simple and full of compassion for children and the downtrodden womenfolk. These noble traits are also shared by Mrs Elizabeth Sonubi, Commissioner for Women Affairs and Social Development.

There is one woman plucked from the International Republican Institute (Funmi Wakama - the face of NTA Channel 7 News in the late 80's and NTA Network News in the late 90's up to early 2000's) who's the SSA on Media - a workaholic like her Oga. Ha! Barrister-Journalist Yusuph Olaniyonu, until now the Chairman of the Editorial Board of ThisDay, is also in the team as Commissioner for Information and Strategy.

So is the Commissioner for Works and Infrastructure, Olamilekan Adegbite - an architect of distinction. The gurus of Finance are also in the team: Mrs Kemi Adeosun, Commissioner for Finance; Mr Rotimi Adewunmi, the Economic Adviser and Mr Wale Ogunyomade, SA, Taxation and Revenue. Barrister Leke Adewolu of the then Great Ife has brought the Diaspora mix into this team, among other distinguished men and women with impressive credentials – clearly, space will not permit me to mention them.

Yes, gathered in the present government of Ogun State are the very expressions of the Civic Will. I believe these Renaissance Men, under the leadership of the indefatigable Senator Ibikunle Amosun, who has made Education his second wife (Mrs Amosun is not complaining!), will, within a short space of time, produce children across the state who can spell 'graduate' correctly even from Primary One. Not even Prof Soyinka will forgive us – and we know him! – If we fail or falter in our mission to rebuild Ogun State.

• Soyombo Opeyemi is with the Ogun State Government.