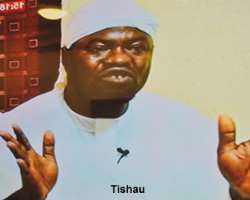 advertisement
There was pandemonium at the National Assembly complex on Tuesday as Senators and members of the House of Representatives fled from the complex following a bomb scare.

The lawmakers, their visitors and senior government officials scampered for safety as news spread that the violent Islamic sect, Boko Haram, had issued an alert that a bomb had been planted in the complex.

The security alarm system of the National Assembly was also set off at 3.43pm when the speculation about a bomb reached its peak.

The alarm led to a near-stampede in the complex as some lawmakers' aides telephoned their principals to run out of their offices.

The scare brought a sitting of the House Ad Hoc Committee on Single Window Contract to an abrupt end. The Minister of Trade and Investment, Mr. Olusegun Aganga, was briefing the committee on how the contract was signed in April 2011 when he was in office as Minister of Finance.

The Chairman of the committee, Mr. Leo Ogor, other members and Aganga made straight for the door when the alarm went off. “Prevention is better than cure,” Ogor said when asked why he ran out.

Other lawmakers holding committee meetings promptly brought them to an abrupt end and rushed out of the committee rooms, dashing to their vehicles.

Later, the Sergeant-at-Arms, Col. Emeka Okere (retd.), claimed that the warning was a “false alarm” when The PUNCH sought his comments.

When pressed further, Okere said that he had ordered his men to clear the crowd at the National Assembly.

“People have been flooding here all day; that is not good for the security of this place. We have accredited over 200 people since morning”, he added.

THE PUNCH gathered that most people in the building had interpreted the directive of Okere to mean there was a bomb scare.

When contacted, the Chairman of the House Committee on Media and Public Affairs, Mr. Zakari Mohammed, described the bomb scare as a “rumour.”

The Minority Leader, Mr. Femi Gbajabiamila, who our correspondent saw leaving the building, said there was “nothing serious.”


“Nothing is happening; I sat down and ate food. I am not going out because of any alert,” he insisted.

At the Senate, the situation was the same, as some senators and their aides were seen leaving their offices hurriedly.

Senate Leader, Victor Ndoma-Egba, who was outside the complex at the time of the incident told one of our correspondents that he received a phone call and had to return to the office later to discover a depressing anxiety among his staff.

He confirmed that the lawmakers had to leave as well because of the rumour, bringing work at the National Assembly to a close.

Ndoma-Egba said the Senate would consider the matter at plenary on Wednesday (today) to investigate the bomb scare.

“It is a rumour. Although I was outside the National Assembly when it happened, I received a phone call, but I later returned to the office.

“The Senate will discuss the matter tomorrow. We will look at the matter at plenary,” he said.”