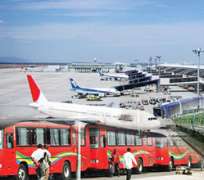 Intermodal transport system, a minister's burden
The relevance of transportation to the country's national development has progressively increased over the years with rapid population growth, urbanisation, agriculture and industrial development.

Recent developments in other sectors such as health, education, agriculture, science, water resources and the oil industry have made this sector to depend on the performance of the transport system.

However, the imbalance in the development of infrastructure, population increase and rapid urbanisation has created a serious deficiency in the quality of life of an average Nigerian with its dire consequence on the movement of goods and services thus increasing the cost of production.

It is in recognition of this deficiency that President Goodluck Jonathan accorded transportation its rightful place in the National implementation plan for Vision 2020.

The Minister of Transport, Senator Idris Umar, gave credence to this when he said that the ministry, in line with its mandate, was focused on identifying and working on projects that were capable of improving the transport infrastructure in the country.

Umar, who spoke at a recent press briefing in Abuja, specifically noted that the ministry would strive towards ensuring that the nation has a transport system capable of meeting the needs of a vibrant industrial economy.

Outlining his plans for the ministry, Umar said that his transformation agenda would be carried out in key areas of the transportation sector. They are rail, maritime, and human capacity building.

For the rail sector, he said the ministry had developed a 25-year rail development programme, which entails the introduction of a standard gauge railway system to link the major cities in the country.

Specifically, he noted that the modernisation project would cover a total distance of 1, 315 kilometres adding that the project had already commenced.

He said, 'Work has started on the first leg of the project which runs from Abuja (Idu) to Kaduna. This project has started in earnest. During my inspection of the site last month, the company promised to deliver on the 36 months completion period stipulated in the contract agreement.

'Currently, it is also heart-warming to note that this project currently employs over 2000 Nigerians and it is expected that over 5, 000 Nigerians would be employed on completion.'

On the new railway lines, the minister said that the Federal Government was working on modalities to engage the private sector through Public Private Partnership arrangements.

The lines are the East-West rail project which covers Lagos-Ibadan-Benin-Onitsha-Enugu; the Coastal line which covers Benin-Warri-Yenagoa-Port-Harcourt-Uyo-Calabar; and the high speed rail linking Lagos-Abuja.

He said that the Federal Government was rehabilitating the old narrow gauge to run simultaneously with the newly constructed standard gauge.

For the maritime sector, he said that the dredging of the lower River Niger (Between Delta State and Baro in Niger State) has been completed.

On the cabotage regime, the minister said that the ministry has approved the printing of the policy guidelines for the granting of ministerial waivers on cabotage.

He also unveiled his plans to revitalise the nation's ports in line with global best practices.

To this end, Umar said that the ministry would soon begin a comprehensive review of its agreement with concessionaires at the nation's seaports with a view to determining their effectiveness.

He said that those found to be operating below the required standards would have their licences revoked.

Umar, however, added that despite the initial challenges of the Public Private Partnership policy on port concessioning, the exercise had yielded positive results.

He also said that the ministry was determined to ensure that all revenue leakages in the nation's seaports were blocked in line with the transformation agenda of Jonathan.

He said, 'In line with the Federal Government's PPP policy, concessionaires at our various ports terminals who are currently operating the nation's seaports are closely monitored to ensure that the desired objective of the partnership is achieved.

'I am happy to report that in spite of the initial challenges, the ports concessioning is yielding positive results in the areas of operational indices such as ship waiting time, turn-around time of vessels, dwell time of cargo, job creation and revenue generation.

'However, some of the concessionaires are reported not to be performing. The ministry will soon review such concessions and will revoke those that are performing poorly.

'This ministry is determined to block all revenue leakages in our ports particularly in the area of revenue generation.'

In meeting the ministry's mandate of improving intra-city rail services, Umar said that arrangements had been concluded to present a bill to the National Assembly for the repeal and re-enactment of the Nigeria Railway Act.

This, he noted, would pave the way for private sector participation in the rail sector.

He said that the need for the new bill became imperative as the subsisting legislation (the NRC Act of 1995) cannot be relied upon for a modern rail system.

He said, 'The ministry's strategy in meeting its mandate is through the creation of conducive atmosphere for the operation of PPP.

'So far, the PPP arrangement has worked reasonably to improve efficiency in the ports. Partnership with state governments has also improved intra-city rail services.

'We have concluded arrangements to present a bill to the National Assembly for the repeal and re-enactment of the Nigerian Railway Act to pave the way for private sector participation in the rail sector.

'The subsisting legislation (the NRC Act of 1995) cannot be relied upon for a modern rail system.'

Going forward, the minister said, the ministry would now focus on supervision, regulation and coordination for the overall benefit of the transport sector.

These, he noted, would help to achieve a safe, efficient, affordable and seamless intermodal transportation system in line with global best practices.

According to her, some modes of transport have become intermodal over time. The airport is a classic example. Most airports now have good car parking and public transport connections. Transport hubs now offer combinations of connections between bus, mass rapid transit, air, car (park and ride) and rail (both high speed and classic).