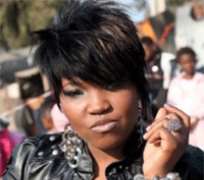 Her real name is Antonia Yetunde Alabi but maybe First Lady of Nigeria's hip hop will ring more of a bell. Sasha is a law graduate who ventured into music more than eight years ago and now holds both local and international awards to her credit.

Her single Adara which she released in 2008 stamped her name hard to the pages of fame. The song in 2009 gave her the Best female artist award at the women in entertainment award ceremony held in England.

She also took home the Channel O awards for the best female video awards before being pronounced as MTV base Africa best female artiste in 2010.

Saturday Vanguard recently engaged this ebony skinned bundle of talent in a chat where she speaks about her law degree, music career and the shocking consequences it could have on her love life.

Read on….
You have a clothing line, how well is it doing?
Eclectic by Sasha is still on but I only attend to my clients just on one on one basis and it's going to be so for now. I'm still working on my retail collection that should be out before the end of this year.

It will be a mini-launch because I have to focus on my album which is coming out at the same time. So that people can know where to buy ready-to-wear clothes and then they won't need to email or call me. For now, you place your order and it's custom made for you.

Tell us about this new album?
sasha
My new album is titled Sasha speaks. It's ready, I'm just waiting for an official date. It's not however going to be an album launch per say, but an album listening session.

The album title explains it all. It is basically speaking about a lot of issues and nothing specific. For example on the Lagos stereotype where they play songs and people think all these Lagos girls are materialist or wayward.

I tried to counter that in my songs as I speak on how I live and enjoy Lagos and not be way ward. You can be a giddy babe and be just cool.

Will you tag yourself a tomboy?
No o! I know I started off as a tom boy because a lot of things that my female friends will do were not interesting to me except for maybe shopping (laughs).

I probably started of as a tom boy because I was a bit more brazen, adventurous and outspoken but I don't really think I am anymore. I'm a woman now I've grown over the years; that I am feisty doesn't mean that I'm manly

But do you think your fans know this?
Well I feel there is a lot of work to be done where communicating artiste are in respect to the Nigerian audience.

Some people understand, some people don't get it. That is why people in the industry need to bridge a lot of such communication gaps. Because for instance when you hear hip hop, rap, you're thinking, 2pac, Biggy or people getting shot and so your orientation of what a hip hop artiste is will be founded by these false illusions.

For me, I call myself a poet, a motivational speaker. People say when they see me on stage I look so aggressive. I believe that the content of what you are saying matters. If you watch the Adara video, I wasn't aggressive there because of the message in the song.

You have to communicate your message in your songs. The fact is that I might be aggressive when I'm on stage, but then, I try to communicate my message to the audience. I hate to be a tom boy.

Do you think this has discouraged male admirers?
Well I certainly hope not, because I'm an African woman and African women are the strong confident ones and this is exactly how we expect our men to be. But then I don't just come at you and dare you. I'm not that kind of person.

Sasha you have to calm down o! because you know you might be scaring men away but then I say what have I done to scare anyone. I mean this is what I do and so it depends really on the individual. It's not about age or about any thing. It's about the confidence of the person involved.

I don't see why you should see my performances as a deterant to anything that you might have in mind.

What kind of a man will like to have?
God fearing. I know that sounds more like a clitche now you know let him be tall, dark and handsome but you know for real I want my man to be God fearing. The thing is when a man fears God then you should know that every thing else follows.

I also want him to be someone that is very confident, hardworking and has ambitions.

And is there a man who fits that picture now in your life?

(laughs) I don't talk about my personal life if that's what you mean.

Ok tell us how you were able to combine law and music?

It wasn't easy for most parts but as much as it wasn't easy it was easy, I don't know if that makes sense but most of the time I was in school things were a bit slow and then when I come back on holidays that's when I have my shows, concerts and interviews with the media is easy to conduct.

I really had to priortise. But then, law and a music career have a lot of familiarities. You have to have a great memory and you have to be hard working as well. These are the core requirements and I think that it made it easier for me.

Will you ever practice law?
For me personally I've never really wanted to be in the court room although there are some parts of law in the advanced stages that are interesting to me such such as Mediation.

Some people don't like to go court and so when there are issues they call in mediators to try and settle issues without necessarily going to court. I also like company secretary or corporate secretary where you could give or have legal advice.

There are a lot of other things that could be done with law that you don't have to be in court to do. I like settling arguments but I don't think I'll love to do that in court.

Do you think leaving school for a music career is worth it?

I believe every one should have some formal education for some any kind of career that it is you want to do.