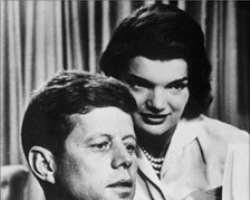 JFK had joked about the threat of assassination, Jackie Kennedy said

Audio tapes of Jackie Kennedy, recorded months after the 1963 assassination of her husband President John F Kennedy, have been released for the first time.

In the interviews with a White House historian, she says civil rights leader Martin Luther King is “a terrible man”.

Jackie Kennedy, who died in 1994, reveals how JFK was scathing about Vice-President Lyndon Johnson and some world leaders.

She recalls, too, how her husband joked about the threat of assassination.

She agreed to the interviews on condition that they would not be released until long after her death.

The eight hours of recordings are the subject of a book – Jacqueline Kennedy: Historic Conversations on Life With John F Kennedy – published on Wednesday.

'That spiteful man'
She recalls her husband's scathing words about his Texan Vice-President Lyndon Johnson, whom he reluctantly made his number two because of the need for a southerner to balance the ticket.

“Jack said it to me sometimes. He said, 'Oh, God, can you ever imagine what would happen to the country if Lyndon were president?”' she said.

She also strongly criticised Dr King, recalling how her brother-in-law Robert Kennedy told her the civil rights leader had been intoxicated at JFK's funeral and mocked Cardinal Richard Cushing's Mass.

She said: “He made fun of Cardinal Cushing and [Robert] said that he was drunk at it. I can't see a picture of Martin Luther King without thinking, that man's terrible.”

She reserved sharp criticism for world leaders, too.

Jackie Kennedy also said her husband had been disappointed upon meeting Winston Churchill in the 1950s.

“Jack had always wanted to meet Churchill. Well, the poor man [Churchill] was really quite ga-ga then,” she said.

“I felt so sorry for Jack that evening because he was meeting his hero, only he met him too late.”

'Happiest years'
She also said it had not been easy marrying into the Kennedy family.

“I was always a liability to him. Everyone thought I was a snob from Newport, who had bouffant hair and had French clothes and hated politics,” she said.

But, after entering the White House, she said the situation improved.

“When we got in the White House all the things that I'd always done suddenly became wonderful,” she said.

“He could be proud of me then because it made him so happy. Made me so happy. So those were our happiest years.”

She recalled that her closest moments with her husband came during the Cuban Missile Crisis in 1962, when the US and Soviet Union seemed on the brink of nuclear war.

Some officials had sent their wives away, but the first lady resisted.

“If anything happens, we're all going to stay right here with you,” she remembers telling her husband.

The young widow described her marriage with JFK as a “rather terribly Victorian or Asiatic relationship” and said she got all her opinions from him.

Speaking to ABC television, Jackie Kennedy's daughter Caroline said her own daughters were “horrified” by their late grandmother's traditional views on women.

Caroline Kennedy said the tapes were “a snapshot of a world we barely recognise”.

JFK had asked the academic if Lincoln would have been rated as such a great president if he had not been killed.

The historian replied that it was unlikely since Lincoln's reputation would ultimately have suffered while tackling the problem of post-Civil War reconstruction.

The former first lady said: “And then I remember Jack saying after the Cuban missile crisis, when it all turned [out] so fantastically, he said: 'Well, if anyone's ever going to shoot me, this would be the day they should do it.'”