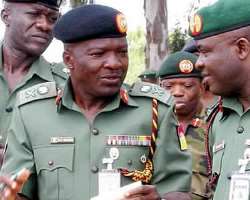 PORT HARCOURT, SEPTEMBER 12, (THEWILL) – In view of current trends in global terrorism, the need for inter-agency collaboration has been identified as the panacea to multiple security issues currently confronting the country.

Major General Sunday Idoko, General Officer Commanding the 82 Division of the Nigerian Army, Enugu, made this observation yesterday while declaring open a study period for officers of the division and senior non-commissioned officers held at the Officers Mess of the 2 Brigade, Nigerian Army, Port Harcourt.

Represented by Gen. Bala Ibrahim Agbab, Idoko bemoaned the volatility and complexity of “national security and contemporary operating environments,” saying they demand “sophisticated cognitive skills” from all leaders at all levels.

He said government agencies need to network and work together by coordinating and sharing information among one another in order to confront the visible challenges and nip them in the bud.

Welcoming guests to the occasion, Brig. Gen. Tukur Yusuf Buratai, Commander of the 2 Brigade, Port Harcourt, commended the study period, which was organised to improve the capacity of the rank and file in the division.

“This is the right time for security agencies to work together, as contemporary security challenges are orchestrated by a new type of adversary whose strength lies in being invisible,” he noted. “The officers and senior non-commissioned officers provide leadership and supervision to the soldiers, so it is important for them to be fully aware of the need for inter-agency cooperation in the new security situation facing us today.”

Vice Chancellor of the University of Port Harcourt, Prof. Joseph Ajienka, noted that while the military has provided envious track record of supporting security arrangements continentally and globally, its disposition during internal crises leaves much to be desired.