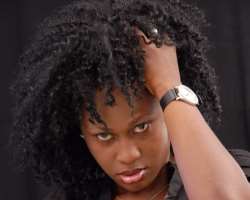 This actress granted an interview with the above headline and it was published on sunday june 14,2009.on this same day in abraka,gitstsmerchants on the set of a movie production eavesdropped on the actress and her ghanaian colleague Van Vicker.

Uche:''Van What I said was off the records,i said with the way men are built,it can only take the fear of God for them to be faithful no matter how much they love a woman,my comments were based on the discussion i met when i walked in.one guy asked another when he was last unfaithful and we started discussing about the animal in man and what i said was that most men are like dogs,this is so unfair that this comment was added into the interview that was conducted,this is so unfair(according to the eavesdropper the actress had tears in her eyes at this point).

Van:''dont worry,just take it easy,i have also been misquoted in interviews,the best thing is to choose the information that you give out and dont say everything that you think''.

well i am not an uche jombo fan but i sympathise with her at this point,she should take this in her stride.i guess that from now on,she will understand the wisdom of the forefathers who said''men should try to find out the reason God made the mouth to stay shut and the ears to stay open''!