I HAVE NO REGRET PROPOSING SINGLE TERM 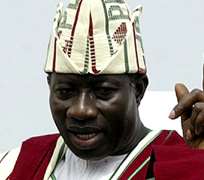 Jonathan, who spoke during a Presidential Media Chat, in Abuja added that he was a leader committed to the transformation of the country.

He said, 'I have no regret over the single term proposal. It is to stabilise the polity. Tell me the country that will stabilise its economy without first stabilising its polity? Some analysts say it is corruption that is the country's problem. But some (also) say from 1960 till date, we have not got any stable polity. I am not saying single tenure alone will bring about a stable polity. But (it is good) because of the circumstances we have in the country now, and in order to reduce tension.

'If you elect somebody today as a chairman of a council or a governor, he will do everything to make sure he wins re-election. Within the party, he will want to get a structure that will favour him. That is the first problem we normally have. For them to work with people at the party, this issue of second term should be jettisoned because politics is built on the structures of the party.'

He said transformation could be painful but any leader who wished his country well would not be weighed down by criticisms.

According to him, the proposal is aimed at stabilising the polity against the political unrest usually witnessed every four years.

While maintaining that four years were too short, the President urged his critics to wait for the bill which he said he had not even forwarded to the National Assembly.

'Even in that report, we said seven years. My thinking is that seven years for president, seven years for governor and six years for the national assembly. I think four years are too short; six years better. I have not submitted any bill to the National Assembly. Before people comment on it, they should see the bill. People are only feasting on rumours,' he said.

The President, who said he could not ignore WikiLeaks because his name had been mentioned, added that there was no iota of truth in what the whistleblower reported about him and his wife. He also implied that he did not believe the criticisms that one of his aides reportedly made against him in the cables.

'The issue of WikiLeaks is like beer parlour gossip. It claimed that my wife was arrested with $13.5m at Lagos airport. You cannot ignore it if your name is mentioned, but you can not say that because WikiLeaks says something you must castigate that person. I am thinking people have different kinds of WikiLeaks.'

President Jonathan who further said that the endless bloodletting in Jos, the Plateau State capital, was not in any way connected to religion, however, noted that he would not rule out the fact religion played a role in it.

While stressing that no human being, Christian or Muslim, had the power to kill the other, he added that the use of force would be counter-productive in ensuring peace in the state.

He said, 'The problem in Jos is not between religious groups. But it (religion) is now playing a role. Religious difference is like a wind that spreads the fire. Nobody has the power to kill, either you are a Christian or a Muslim. Enforcing the law doesn't bring peace in any place until the people themselves agree to have peace and that is what we want to achieve. We are meeting with the governor of the state and the Chief of Defence Staff on Tuesday.'

According to him, there will soon be an improvement in the power sector. However, he said he would not disclose the megawatts to be produced or the amount to be injected to revive the ailing sector.

'No doubt, the security challenges discourage investors from coming into the country to invest. I can assure Nigerians that the problems will continue to decrease. Both the police, SSS and the military are doing a lot of work and they are up to the task,' he said.

On the issue of a convocation of a Sovereign National Conference as being clamoured by some Nigerians, the President said he supported an avenue where Nigerians could discuss.

He said, 'Yes, of course, I support that Nigerians must discuss. Nigerians have been discussing. I have asked the Secretary to the Government of the Federation to look into the requests of Nigerians. We are going to set up a committee.

'The areas that are still controversial, we will look at it. We will always encourage discussion because people should have the opportunity to talk. It is when people do not discuss that there is a problem.'

Speaking on the issue of corruption, he said his government would not stop indicted officials from being prosecuted.

'Nigerians have elected me for four years. They should watch what will happen in that direction,' he stated.