The unending reign of pirates in Nigeria 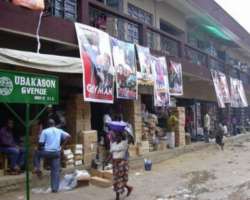 Nigerian artists continue to be victims of diverse forms of piracy. Many efforts have been made to try and end the illegal activities of pirates who make money from other people's work.

A few weeks ago, stakeholders came together to try and come to grips with the problem at an International Stakeholders' Summit on Counterfeiting and Piracy. Participants discussed the extent of the problem.

A story was told of a man who flew from Chicago to Nigeria every two weeks and purchased all the home videos that were released in the previous weeks. Back at his base in Chicago, he burnt the CDs and sold at least 500 copies a week at $5 per copy.

Piracy appears unchallenged in the Nigerian context,partly because the theft of an artiste's intellectual property is not yet equated in the public mind with other offences against property and person like theft and fraud.

Mayo Ayilaran, the chief executive of the Musical Copyright Society of Nigeria (MCSN), blames the Nigerian Copyright Commission (NCC,) for the illegal operations involving the copying of music and video discs. "The NCC has set up an organised system where they extort money.

Those who want to exploit works can now do so easily through the NCC's established ODR outfits (Optical Disc Replication plants engaged in the production of CDs and DVDs in Nigeria).

"With a licensed letter from the NCC, any businessman can approach the ODR and get their work replicated. Nobody would ask for the owner of the work or permission from the owner to reproduce. The only thing else that is required is about N6,000 per copy of the work needed to be reproduced," Mr Ayilaran said.

Mr. Ayilaran said the copyright commission was deliberately boycotting the copyright society and issuing licenses without confirmation from the appropriate sources.

Speaking with NEXT, Tony Okoroji, chairman of the Performing and Mechanical Rights Society, PMRS, who recently released a book titled: "Copyright, Neighbouring Rights and the New Millionaires (The twist and turns in Nigeria)" agreed with Mr Ayilaran's concept of the NCC. "The NCC has failed woefully in protecting the rights of copyright owners in Nigeria. They have single-handedly made the market very conducive for pirates to thrive in," Mr Okoroji said.

Onyeka Owenu, a popular broadcaster turned singer, actress and politician was very bitter with the way the NCC had handled the issue of piracy in the country. "I told my children that anytime they meet Adebambo Adewopo (the chairman of the NCC) they should hold him responsible for the things I was not able to do for them. He has frustrated me. Anytime my music is used in air planes and hotels rooms, I lose," she said.

Since Onyeka launched her music career in 1981, she has released about eight albums which included hit tracks like "One Love", "You and I", "Bia Lolo", and "The Peace Song".

These tracks rocked the eighties and shot her to stardom but the singer said she didn't get a dime from album sales. Today, with ₦150, one can buy a compilation of Onyeka's greatest hits on the streets or in small music shops but she is yet to feel her money in her hands.

Representatives from Nollywood, the Nigerian film industry, said they are also affected. The case of Moses Olaiya, a veteran actor and film producer, popularly called Babasala was discussed. Recently, Mr. Olaiya has fallen on hard times and his colleagues have contributed to raising money for him. His work has been pirated numerous times. For example, before his hit movie, "Mosebolatan" was released officially; the movie was all over the market. Babasala should be worth millions of money but in real terms, he is not.

Zeb Ejiro, a veteran film producer, said at the May summit, "Enough with the cosmetic approach, the NCC has failed and I recommend the hierarchy of the NCC be changed."

Kanayo Kanayo, an actor, blamed the NCC for the increase in piracy and the low quality of films produced in the Nigerian Film Industry. Kanayo divided people who work in the industry into two categories, the professionals and the prostitutes.

According to his analysis, the professionals were the ones who concentrated on their primary roles as actors or directors while the prostitutes were the jack-of-all-trade who juggled work in the movie industry with political appointments or business activities. He said that the surge in piracy has driven many professionals in Nollywood to become prostitutes and some have even left for good because they could not make returns for the money spent on making a film.

A representative of the NCC led by Adebambo Adewopo, the chairman of the NCC responded to the artists' comments. He said that the NCC acknowledged the strong statements made by the summit participants and was "working towards a solution but the stakeholders have to be united and come together to make it work. The NCC cannot do it alone if the parties involved are not united."

New generation artists in Nigeria have begun counter approaches to deal with the nuisance. P- Square, the hip-hop duo, demanded an up-front payment of N70 million from their marketer before their recent album, "Game Over" was released into the market. The payment covered all current and future sales.

Dbanj, a popular hip-hop musician, engaged Mr. Biggs, the fast food joint owned by the United African Company Nigeria, UACN, to assist in selling his albums. Thus anyone who bought a copy outside Mr. Biggs was buying a pirated copy.

These strategies have shown some progress but piracy remains unbeaten. Emeka Mba, director general of the National Film and Video Censorship Board, urged consumers to fight piracy by buying authentic works and not fake products because they are cheap.

"Until we begin to see the issues of piracy as cancer because it affects us all, we have not begun to fight yet. If we continue to buy CDs on the street and say "what does it mean" to Dbanj or KOK, we are only helping pirates," he said.

Already there is a move to ban all importation of foreign CDs and at the counterfeiting and piracy summit, participants recommended that the Federal Government should use diplomatic means to engage the government of China to highlight the serious damage caused by the export of pirated goods into Nigeria.

They also recommended the computerisation of applications to accelerate registration of IP rights and to create a database which can be used by enforcement agencies to determine rights and authenticity of imports, exports and manufactured goods. The authentication of artists work with holograms was also discussed.

Participants also acknowledged that the campaign against piracy could only be won when all the agencies including the NCC, MCSN and PMRS work together with the owners of the work. Only when all these recommendations have been implemented, can the war against piracy even begin.