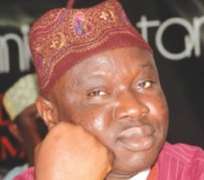 Speaker of the Lagos State House of Assembly, Adeyemi Ikuforiji has said the allegation of perjury and embezzlement of over N7 billion state funds against him is political.

He said this while speaking with journalists at his GRA lodge in Ikeja shortly after his arrival from the Economic and Financial Crimes Commission's (EFCC) office in Abuja.

Ikuforiji maintained that he was never arrested and detained by the anti-graft agency, stating that he only honoured an invitation sent to him by the commission while he was on his way to perform the lesser hajj in Saudi Arabia.

His words: 'I was invited by the EFCC but the invitation came late. I got it on my way to the airport for lesser hajj (Umrah) last week and I sent a note addressed to the executive chairman of the commission explaining that I received the letter late and because it is Ramadan period, I will honour the invitation on Thursday September 4.

'When I came back last Thursday, I called them that morning and the officer I spoke with told me that I should come that afternoon and we went. On getting to Abuja, there was heavy traffic on the road because of this Boko Haram sort of thing. 'The soldiers mounted roadblocks and there was a heavy traffic. So I had to call them again that I am in the traffic and the officer I spoke with said since it is getting late, it is better I just come in on Friday morning. So I went there to honour the invitation of the EFCC. I was not at anytime arrested by the commission,' he said.

While clearing air on the allegation of the N7 billion, he said 'the House had a budget of about N6 billion. How somebody, no matter how highly placed, the Speaker of the House is just one among the 40; how he is able to steal N7 billion out of N6 billion is a question for the petitioners and the authority to answer. 'As for me, I know there was no N7 billion at anytime in the House, not over a period of one year though. We never had such a thing, so there was no way I could have stolen N7 billion. I don't even steal at all. You don't need to suspect this one; this is a very clear case,' he said.

If somebody comes and talks of stealing N7 billion out of N6 billion; if somebody in his right senses could come up with an allegation of Ikuforiji being an ex-convict in America and convicted of drunk driving; convicted of credit card fraud in 2005. I came to the House on June 4, 2003 and I became the Speaker in December 2005. How come you did not have this information or misinformation between then and now? Why now at the end of 2011 that you now start talking of allegations? And for God's sake, does anyone who is in his right senses agree with a person that an ex-convict visits the United States of America at least once in two months?

'How much of an extraordinary ex-convict is that convict for you to be able to go in and out of America un-apprehended? It is nonsense. We all know it is political; for me it is madness and for me as a believer, I don't bother myself about those things because it is one of those things you go through as a leader,' he added.