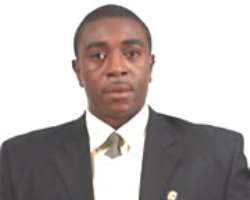 A-list actor, Bob-Manuel Udokwu and anchor, Gulder Ultimate Search 4 (GUS4), is one of Nollywood's biggest names. Easy-going, friendly and ever smiling, can be called a pioneer in the industry, having featured in the movie taunted to have started what has now come to be known as Nollywood; Living in Bondage. He was also a member of the cast of Checkmate, a wave-making movie of the early nineties. The Ogidi in Idemili North Local Government Area of Anambra State born actor was trained at the University of Port Harcourt where he obtained a Certificate and Bachelors of Arts Degree in Theatre Arts. He equally bagged a Master's degree in Political Science with specialisation in International Relations from the University of Lagos. He is Cassandra and they have two children. Adia Ukoyen caught up with the gangling actor in Lagos for this interview.

What was it like anchoring the Gulder Ultimate Reality Show IV?
It was a different ball game all together. I relied on talent, experience and training to do my best. I am an actor and I play different roles at different times. Today my performance has proved that there is nothing I cannot do. I was able to prove sceptic wrong with my performance while I also got a lot of commendation, especially from those in the military. We are very dismissive of people. Today, what I have done is there for people to see. If they call me back this year, my challenge would be to beat my own record and if they call somebody else, God help him; his challenge would be to beat my record.

Shere Hills was a different experience in terms of the conditions for the productions and the topography. The weather was entirely a different ball game. With my performance, it is easy for people to judge me as an artiste.

What were some of the high and low points of the show?
The high point was when the two finalists were struggling to get the most coveted trophy. It was a culmination of everything we had done and everything that we went to do in Jos. But the low point was when one of the contestants died. It was a painful experience for everybody. It underscored the transience of life; born today, gone tomorrow. Within a twinkle of en eye, the contestant was gone. It was a rude shock for us all. The entire show was a new experience for me. There were no written scripts. I remember a particular female journalist who kept taunting me. She doubted that I was up to the task because of the rigours associated with GUS but I told her not to judge a book by its cover. Most of those who love what I did are military people. The response I have got from every arm of the military is that somewhere along the line, I was one of them. I proved skeptics wrong!

How and when did you begin your acting career?
I was in Living In Bondage, the very movie that started it. I was also in Checkmate which started running in 1991. By 1992, they invited me to be part of Living in Bondage. After leaving secondary school, I watched a play on NTA, Enugu. After watching the play I said I could do better than what they did. I copied the name of the producer; Rose Ofieli (now Mrs. Rose Nwanna). I went to NTA to tell her that I liked what I saw and that I would like to be part of it. She later gave me a script to read, I did and I never knew it was an audition. Her colleagues were in attendance, but I was very bold. After reading, she invited me to her recording the following day. She told me what I should bring as my costumes. The following day, I was at the location and she gave me a role to play. Subsequently, she started giving me more roles.

So far, which would you consider your most challenging role so far?
I act on stage, radio, and television. I must say that every role I have played has been quite challenging. I do not only act, I also direct and produce. And doing these three together is quite challenging, yet I combine them. For instance, I produced, directed and played the lead role in Wedding Bells. I did the same in Matters of Hearts and Master Strokes. But Woza Albert was quite challenging.

What is your assessment of Nollywood?
Please note that the rate of production has nothing to do with professionalism. Yes, we churn out movies every day but the number of films released has nothing to do with quality. The danger is that we are quick to come to conclusions. Nigerians are pessimistic. The industry is just 17 years-old and what we get most of the times is knocks and more knocks, most of the time from the media. Our movies are becoming a staple across the globe. TV channels are dedicated to the phenomenon called Nollywood. It is a large employer of labour. We had been adjudged the third largest all over the world, and just recently, second. We intend to take our movies to the Oscars, so you see, we are doing well. For God's sake, give us credit. Besides, there is no basis for comparison between Nollywood and Hollywood. If you know the history of Hollywood, then you will appreciate that we have not started. Hollywood is over a 100 years.

Are you married?
Yes, and I have two kids.

Do you get to spend enough time with them?
When I'm not working, I stay at home to play with my family. I play with my kids a lot; we joke about so many things. The relationship between my children and I is a father-friend relationship and although we draw lines, we cross borders at times. I also join my kids to watch movies, tell them stories, while they ask questions. And I never stopped them from asking questions because I'm a family oriented person. I spend my weekends with my family if I'm not working because most times, it's my work that determines whether I'm around or not. I enjoy staying with my family, we go out together to visit family friends, spend quality time together.

What is the worst thing a fan has done to you?
The phone calls are the worst thing any fan has done to me because they call at all odd time wanting to know personal things about me. Some fans would harass the living daylight out of your life. They don't care whatever. Being am married doesn't change anything. Sometimes they get very crossed when I try to let them know that I am a married man or when my wife answers the phone.

How does she deal with the harassment?
I got married nine years ago but I will tell you that it has not been easy. Female fans create problems for us. Ironically, people who are not in the business feel that you are having a swell time but I tell you, it is not easy. I want to do my acting and go home in peace. That is why I don't encourage people to visit my house. I don't encourage people to visit me. I try to protect my family. That's all I have. By and large, she is a very understanding and reasonable woman which is a big blessing.