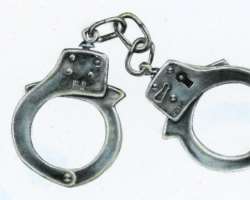 …“I stole it to impress people at concert”, says suspect.

The inscription, 'vehicles are parked at owners risk' are usually boldly written at every given point, both at the international and local airports and parking spaces.

This, among other reasons, is apparently to avoid being held liable in the case of any theft. But in spite of this boldly written inscription, some travelers still leave their vehicles in the parking space with the hope of using same back to their destinations, on arrival.

Unfortunately, some criminally minded individuals have mastered how to use this parking space as an easy avenue to snatch vehicles of their choice.

One of the travelers, who left the shores of the country on May 29, 2009, leaving his SANGYONG jeep with registrations number TK 41 AAA at the parking lot, got the shock of his life upon his arrival when he discovered that the car had disappeared.

Luck however ran against the suspected car snatcher as he was arrested at Ogere along the Ibadan/Lagos expressway by operatives from the Ogun state command same day at about 10pm.

Ogun State Commissioner of Police, Mr Argungu Hashimu told Crime Guard that the suspect, 26~year-old Ikenna Opara , when stopped by his men who were on stop- and- search routine job, kept on moving.

This, he said, aroused suspicion and the policemen gave the motorist a hot chase, at the end of which Ikenna was arrested with some documents bearing other peoples names.

In this interview with Ikenna, he claimed to be a gospel artist who was preparing for a Music concert in Abuja. To the astonishment of all present, he stated that he stole the vehicle because he wanted to impress people at the concert.

Narrated he: “ My name is Ikenna Opara, a native of Obiere in Imo state. I am a gospel singer and an entertainer . I also play football. I left Owerri where I was staying for Lagos about a month ago and stayed with my friend at Ajao estate. On one of the occasions, I visited the international air port hotel for sight seeing and was moved by the posh cars I saw.

Before then I have been thinking of how to raise money for my pet project. And besides , I was also getting ready for the musical concert in Abuja, which I wanted to storm in a big form.

So the second time I visited the air port, an idea struck me that I could make do with one of the cars at the airport to Abuja . At that point, I just walked round and after making up my mind on which of them to snatch, I went down the road where I found n mechanic. I lied to him that I had lost the car key.

He believed and followed me. On getting to where the car was parked, he broke the glass by the occupant's side, and thereafter removed the wires that ran into the ignition key and joined them together to start the engine.

But when he finished, I realized I had no money on me to pay him. But immediately I opened the door, I saw a mobile phone and gave it to the mechanic, who m I told I had given all I had to my cousin who was traveling out .

Immediately he left, I drove the vehicle out of the parking lot with the intention of driving straight to Owerri. But somehow, I was stopped by some policemen along the Ibadan/Lagos expressway. I refused to stop because I thought they had got wind of the stolen vehicle .

As they were chasing me, I ran against traffic and in the process, ran over a man. But at the end, I was caught. At that point there was nothing I could tell them to convince them I was the owner of the car. First, the driver's licence bore another person's name . Even when they asked me for the name on the document, I could not tell. That was how I was taken to the station”

Asked if he had any regret, he replied, “ I regret my action. If I had known I would not have listened to the evil voice that whispered the thought into me. Now , I can not attend the music concert. This is all the handiwork of the devil and I promise that if am allowed to go scot free, I swear I will turn a new leaf”

The suspect is expected to be transferred to the Airport command where the crime was committed.