Celebrity couples making it out against all odds 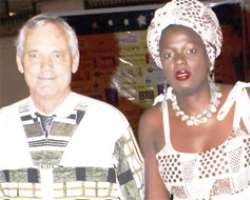 Breaking up and making up is said to be the hallmark of celebrity marriages the world over. After the glitz and glamour of the vows, that got the whole world really wowed with fascination and flow of emotion what seems to follow naturally are curses and lawsuits.

It has even been argued that it is only among celebrities you will find the most bizarre of marriages. In the enclave of these rather special people we have seen the good, the bad and the outright ugly. Though many reasons and theories have been proffered for the failure of celebrities being able to hold it together.

The simple allure of the limelight, clashing ambition and even the esoteric scientific postulation that 'like poles repels' have been offered as likely reasons why celebrity marriages more often than not hit the rocks.

When it comes to the lasting ones one begins to wonder how it worked and may want to question the avalanche of reasons being put forward why most celebrity marriages would most likely run asunder.

Though there's no questioning the fact that there are more failed Hollywood marriages than successful ones but when it comes to Nollywood the trend doesn't seem to run the same course as there are so many Nollywood marriages that have endured and survived, if I can be permitted to stick my neck out that long. While it is true there are many 'enduring marriages' walking the thin line between success and failure there are also those that are looking shipshape enough to ride the storm of any weather.

Wherever Olu and Joke found the magic to make their union works is a guess as good as any penny for any thought. These veteran Nollywood stars met in 1981 and I think little Cupid went to work, ever since their hearts have been bleeding for each other.

Though it has not always been bed of roses with the two stars; they have had their ups and downs and love somehow always found the way to see them back together again. When the rumour was running wild around that they have broken up and that Joke has relocated abroad no iota of truth was found in the gist as they denied the rumour..

As Olu confidently stated in a recent interview “Our marriage is built on trust, friendship, love, respect and understanding. When you trust somebody, you won't have reasons to doubt her when she tells you she is doing this or that. If you respect her, you would not be wondering what she is doing.

Presently, my wife is in London and I am in Nigeria, I trust her in whatever she is doing.

If we are on set together, I see her as a character and the relationship between us is that of the characters we are playing at that particular moment. But when we finish, I would call her and say, my dear come and we go back to being husband and wife.

If my wife sees me kissing a younger girl in movies, she understands and when she kisses, don't I understand? It's a job and does not go beyond the job”, he said, laughing.

Talk of chemical reaction and bonding and Isaac and Nneka automatically pop up in you mind. This couple is perhaps the most mysterious, the most loving and by far the most inseparable I have seen of our celebrity couples. How they get their acts on; working together, living together and sleeping together must have beaten the imagination out of most people.

Jointly presenting the popular Goge Africa on television and cable networks, they look tailor-made for each other. It is actually heart-stirring seeing them laughing, dancing and sometimes cuddling together - just to get the job done? I don't think so, it goes deeper, far deeper than that.

However, their love-story is that of a kinky irony as they met on set of a movie ' Love in Vendetta' where they both played lead roles of a boyfriend and a girlfriend.

Somehow, the chemistry sparked off from there. That was in 1996 and the make-belief role has since been converted into reality. When asked how they have been able to keep it together for this long, working together and living together, Isaac was proud to explain.

His words, “ Of course, there is so much compatibility… I think we are lucky; because some of my friends ask me, 'why would you bring your wife to work with you on TV?'

And I say, 'yes, she can handle it. I find out that she is talented. She is intelligent. She is beautiful. And we can flow, so why do I want to bring somebody else to do it and then I would be paying?'And for logistic reasons at times, it's most suitable for two of us. We can take decisions within minutes to go and cover a show.

Professionally, both have everything in common; both are into acting and broadcasting but what has made marriage work for them for the past seven years is not just being in the same field but love, tolerance and respect have been cited by both couple in several interviews as the recipe that is keeping it together for them.

As Ireti recently confirmed in an interview, “What are you doing in a marriage with someone you cannot relate with or who you don't share the same value with, it is a recipe for disaster.

You must marry someone who you share the same value with, respect, understand what you are, who you are and the way you are. Marriage is a partnership. He doesn't have to say it by mouth, after all I'm his wife and we live together. We've been married for the past seven years.

So, he doesn't have to impress me. I've been fat, skinny, ugly and pretty, he's seen it all, there is nothing new. He gives me absolute love. I have no doubt his feeling for me”.

They sing and act, though more of singing than acting. Tunde and Wunmi have grilled through many a dirt and grim too much but remains to be seen is the couple growing from strength to strength. Just when rumour-mongers are getting set to rock their boat this musical couple always seems to always get their oars on and sail above of any muddy water of scandal. As Wunmi will tell anyone who cares to listen
“Communication and respect for each other's feeling is the staying power of the marriage”.

One of Nollywood's sexiest men and highest paid actor, Emeka Ike is one of the most happily married men in the entertainment industry. His marriage to half-German, half-Nigerian, Emma, is knocking on seven years now. Though Emeka Ike has been implicated in some scandalous stories of infidelity, but it hasn't shaken a single pillar off the foundation of his marriage to Emma, an amiable woman who enchanted Vanguard editors with her alluring charm and easy demeanor during the presentation of prizes to winners of 'Sexiest man in Nollywood' earlier this year, at the Vanguard office.

Imelda has threatened Ramsey, known in some quarters as an incurable playboy, with divorce time and time again.

The recent episode where Ramsey was caught in the act, kissing an unknown damsel, made the papers and everybody was sure that would be the end of the marriage. But all it ever panned out as was as a rumour as the couple still remains very much married.

Despite continuos threats from the Imelda the marriage is getting on good for eight years now.

Others who may be considered as making their marriages work against all odds are Captain Mathew and Omotola Ekeinde who have remained married for 15 years, producing four kids.

For Richard Mofe-Damijo, it started almost like a fling with Jumobi Adegbesan, then a presenter with AIT because many felt RMD hasn't completely gotten over the death of his wife, Late May Ellen Ezekiel but the marriage has lasted several years.

Also worthy of note is the marriage between Dejo Richards and Monalisa Chindu, Anita Hogan and Ted Mark, Oluchi and Olandi.

These couples have shown marriage can indeed work for celebrities just like any other people.