I’m ajepako and would never forget that –Ify Agwu, actress 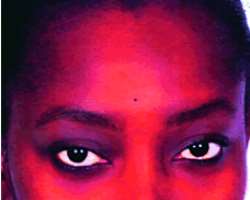 The stage came alive recently with Adventures in the Forests of a Thousands Demons, a play written by Professor Femi Osofisan but which was an adaptation of award-winning story, Ogboju Ode Ninu Igbo Irunmole written by the late D .O Fagunwa.

The play won the hearts of many theatre enthusiasts across the country having enjoyed the rich acting skills of seasoned stage actors like Toyin Osinaike, Taiwo Ibikunle, Tony Ofili-Akpam and Yemi Akintokun among others.

The play also starred an upcoming actress, Ify Agwu, who played one of the leading roles, Iranlowo (Help), a philosophical character that represents a Deus ex machina in the literary parlance.

http://nollywoodgists.com met with Ify just after the play and the young but prodigiously talented actress revealed a lot about herself as a writer, actress and most especially, the socio-political significance of her role in the epoch-making performance. Excerpts:

Growing up
My growing up was very interesting and challenging. I grew up under my grandmother, Mrs. Watuwagbodo Weneani. My secondary school particularly was relatively good. There were bad times but it was challenging for me. My grandmother taught me a lot, most importantly morals such as contentment, hard work and so on. I used to wake up early to go to the stream and later cook with firewood. My mother made me to realize that as a woman, I should have good character. You could be beautiful but that is immaterial. She also taught me to be satisfied with what I have and that I should not date men because of material things.

Life on campus
I live according to my grandmother's advice. She said I should always remember the daughter of whom I am. I am an ajepako (struggling girl) not a buttered one as you may think. I had a humble and rough beginning like almost every other student. I like to be contented with life. My granny says one should always be contented even when people love or don't love you. My grandmother is my role model and this is because she is an embodiment of native philosophy.

Inspiration
I am mostly inspired by the agonies of the oppressed. It could be their tiredness or hunger on their children's faces. These oppressed could be in Rwanda, Sudan, Somalia or anywhere. It could also be their laughter or the smiles of their children. My writing endeavour is instinctive, it just flows. I have written on such themes such as war, love, hunger, relationship, children and death of infrastructure among others.

My role as Iranlowo
Iranlowo in the play is like the spirit of grace and beauty. It could be likened to the Biblical Holy Spirit, as it is the spirit that appears to save people from difficulty when called upon. It comes when you are in pains, agony, trouble and what have you. Iranlowo is invoked when the hunters are at the end of their tether, then it appears to give them a leadway. Socio-politically and philosophically, Iranlowo represents a nation's conscience or divine saviour.

As the hunters headed by Akara Ogun have to resort to Iranlowo when they are at crossroads, so does the nation and its leaders should appeal to their conscience or God when things turn adrift. Iranlowo was the gracious spirit that led the adventuring hunters to their 'destination' in the play. This destination is symbolic in that it is not a physical place but a state of maturity in life at which an individual reaches and gets a grasp of the reason for coming into the world. This is why Iranlowo says that 'Mount Langbodo, (the hunters' destination), is not a place but a moment of understanding'.

Lessons taught by the play
On a literary level, it is a story about determination, but for how it relates to our present society, it is about leadership. Akara Ogun as the head of the hunters led his team well but only by constantly heeding the advice of Iranlowo. It is also about understanding of the human self, about how one can pursue his goal in life well. Philosophically, it is only one person who actually went on adventure to Mount Langbodo in the play.

This is because he has passion as a leader and so all the other hunters with their varying attributes only represent his other attributes. The negative ones he had to drop and they were the ones who did not make the journey home, as there were only three who made it. These three represent three virtues a leader must possess. They are passion, humility and strength.

On Nollywood
I will love to be part of Nollywood.

Favourite food
All foods are my favourite. I eat what I see. I don't discriminate.

Ideal man
I don't want to talk about my man on the pages of newspaper. It is private and personal