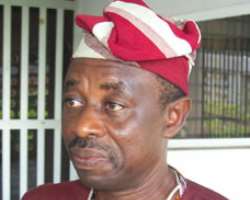 Come Thursday June 11, Position TV features its first non-visual arts personality on Silverbird TV. The encounter with Tunde Kelani, popular cinematographer centres on diverse issues surrounding the production of films in Africa, including the hopes and the impediments.

The interview which runs from 11am is a bold attempt at examining the bourgeoning film industry especially in the context of evolving technologies.

Having been at the forefront of production of cultural films, Kelani is reputed for using contemporary themes to paint on the canvas of indigenous myths and traditions. And as a director of photography whose primary function area is the photography of the moving image, he tells the story as much as the screenwriter. His passion is to use lights, both natural and contrived, to create images, organize his visual landscapes and to interpret the narrative in concrete terms.

His answer to the regular question, why do you do what you do?, is that he drew a real passion for photography very early in life. He managed to own his first still camera in elementary school and never learned to use it, despite being his regular companion, for many years. It was at Abeokuta Grammar School, that his vision and passion for capturing the world through images grew. The rich Yoruba culture of his immediate townscape, the rockhills of Egba, the sheer splendour of the flora of the deep rainforest surrounding brought the assurances of a fully committed life's pursuit.

That he would wind up working for the new television arm of the Nigerian Broadcasting Service was inevitable. And from this beginning, he went directly to London Film school, graduating with a professional diploma after a session.

The period of Kelani's induction into the budding cinema industry in Nigeria coincided with the time of the production of the first generation of indigenous Nigerian films. This period, with all of its hopes and excitements was short-lived. African cinema nose-dived with the declining national economies. Even so did the cinema going culture which all through the decade following the national independence was practically enjoying a boom.

Kelani thinks the cinema failed primarily because of the absence of the enabling government policies and infrastructure. That absence itself was the direct result of African politicians not coming to terms with the role of cinema in the building of a nation. As such the nation lost the powers of persuasion by motion picture, which could have been employed to promote development goals, its capabilities as a tool for engendering national pride and racial identity.

“It was a mistake, and it is still a mistake to leave our film production culture to market forces”, Kelani declared.

Before the advent of Nollywood, which emerged and has sustained itself unassisted by the State, Africa practically allowed others to tell her stories for her, he said.

On the issue of good practice and performance quality especially in Nollywood, he is optimistic that quality is generally on the rise. And he surprised the crew by expressing dissatisfaction even with his own work.

“A lot of work has been done by our establishment here which people appreciate a lot, but they can be done better, with more resources a our disposal. Take our latest movie “Arugba”, for example. We have returned to the film location on several occasions when we had a little more money that we felt we could use to improve on certain aspects of the work”.

But things are bound to be better off for someone like him, than it would be for, say, an upstart. He didn't entirely agree.

“I think we have been privileged. I have a good education in film production. I have been well exposed. At the time we started things were not as difficult as they are now.

“What can you do when power supply is far from guaranteed? Who wants to buy a film when they have no electricity supply in the house to watch a DVD? I don't think we have sat down yet to seriously consider how much this country loses because of the unimpressive power sector. You see, that is a real problem for all of us”.

Kelani's latest film was recently adopted by the Lagos State Government for a series of mobile cinema exhibitions in all the local government areas of the state. That experience of being on the road he is quite grateful for. It is not only reminiscent of the Yoruba traveling theatre tradition which he remembers so well as a very young adult in Ibadan (he was an avid follower of the theatre trends at the erstwhile popular proscenium stage theatre in Ibadan, Obisesan Hall), in recent years, Kelani's Mainframe crew has engaged in extensive community cinema work in Benin Republic.

“Mobile cinema is one of the ways we can get ahead in the face of our NEPA problem”.

Another interesting revelation from the programme is the discussion on Osodi. Position TV asked to know if his choice of Osodi was deliberate and if he gets his stories from his densely populated surrounding. Many writers and artists like to touch base with the people. For example, British-Nigerian author and film writer Biyi Bandele moved down to Brixton in London from the more middle-class setting of Battersea.

Kelani replies: “I have enjoyed living and working in Osodi. I cannot claim that I have not been inspired by it. We dedicated one of the settings in our film, Ole Ku to Osodi as a way of documenting it. Nobody knew that Osodi was going to transform so suddenly. With hindsight, we would have done more work, taken more pictures. All that is now gone. It is a bittersweet situation.”