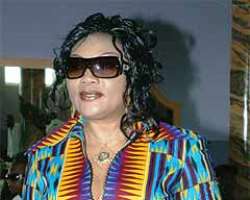 I had the misfortune of seeing the rested screen diva in one of her worst moods penultimate Thursday. It was at a UBA bank on Allen, Ikeja. Believe me; she came in charging like a wounded lion. Not a few customers and staffers, who witnessed the scene, were taken aback by her manners.

Not only did our famous actress ignore the long queue that she met on arrival as she went straight to the counter amidst protests and abuses by angry customers on the line, she actually shoved and pushed her way to meet the cashier.

By the time she left after completing her transaction in record time, at the expense of other customers she circumvented on the queue, many were left wondering if she came to the banking hall straight from a wrestling ring.

That is not the only incident, if I can believe what a snooping bird told me about former Mrs. Ekwu during the week. The story had it that Eucharia repeated her queue-jumping exploit on another occasion at an Eatery in Opebi area of Ikeja, Lagos.

http://nollywoodgists.com source nearly swore with her late mother's head that our revered star actress of yester years was ready to get into a fight in her frosty mood. God, help us by helping our friend and sister. Solve her problem as soon as possible, for she knows not all that she is doing. Amen.

Anyway, Aunty Eucharia had her way; the wounded and angry only had their say.