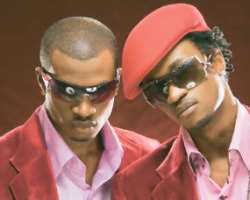 The duo of Peter and Paul Okoye, also known as P-Square, may be facing ejection from their residence in the next 14 days.
This was made known by Chief Charles Nwangwa, the landlord of their house.

According to Nwangwa, the duplex at 2, Agoro Street, Omole Estate, Ikeja, Lagos, was rented by Peter and Paul Okoye and not by Jude Okoye, the musicians' elder brother.

He said the musicians have breached their contractual agreement by converting the boys' quarters of the duplex to a music studio.
The angry landlord also revealed that contrary to the media reports that the musicians own the house, they are actually tenants.

In addition, he said that Jude Okoye was fond of denying him access to his younger brothers, who actually paid for the rent.
When http://nollywoodgists.com visited the artistes' residence, Jude Okoye, who spoke on behalf of his siblings, said that the landlord visits whenever he likes without prior notice, adding that the man took offence because the musicians do not entertain him with the kind of wine he usually asks for.

Okoye insisted that he is entitled to privacy in the duplex, even if he rented it.
It was learnt that the N1.7million rent they paid for three years, would expire next year.