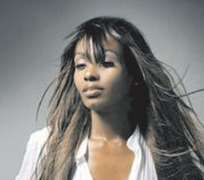 The Jamaican born bombshell that stole the heart of Nollywood's playboy, Jim Iyke, is an interviewer's delight. If she trusted you enough to grant you an interview, you are guaranteed a no-holds-barred explication on virtually every aspect of her life that you may wish to explore. She is fresh, intelligent, beautiful, sexy and supremely motivated.

Success to her is the elixir that refreshes her soul, and she puts in outrageous hours of work to achieve that goal. She is a young woman who has become successful at her craft: acting, and modelling. She has had professional collaborations with some of Hip-Hop's royalties like 50 Cent, Puff Daddy or P. Diddy, Akon, May J. Blige, Dance-hall maestro, Beenie Man, among others.

As an up and coming Nollywood actress, she gave a spectacular performance in the Tony Abulu produced movie-”Crazy Like A Fox”, a performance that won her lots of plaudits and rave reviews.

Since Keturah called last summer to make comments on the back and forth story of betrayal, of romance gone awry involving her ex-friend, Ruth Okoro, and her former husband, now actress Ini Edo's new husband, Philips Ehigiwina, we had been planning to have an interview.

To those of you who followed the story, Keturah was right in the middle of what had been described as a love triangle involving Ruth Okoro, actor Emeka Ike and top actor Jim Iyke.

The news on the tabloid newspapers and on the internet then was that she had betrayed her close friend, Ruth Okoro, who had introduced her to her alleged male friend, Jim Iyke, and had gone ahead to supplant and take Jim Iyke from her.

The story has since been discounted, and in an interview with Jim Iyke last year, the actor vehemently denied ever having an affair with Ruth Okoro. He acknowledged that Ruth facilitated his meeting his heart-throb - Keturah Hamilton. Naturally, I wanted Keturah to tell me exactly the circumstances that led to her meeting her lover, Jim Iyke, and if there was any truth to the story that Ruth was seeing Jim Iyke, and she effectively stepped in, and took Jim away from Ruth.

“Nothing can be further from the truth,” Keturah started. “Ruth and Iyke never dated, and were never in any relationship. It is true that I met Jim through Ruth, and this is how that happened: Ruth had called me to say that there was a movie shoot in Maryland, and that she would love me to accompany her.

“Before this moment, I had confided in Ruth that I was in love with a particular Nollywood star - Jim Iyke. Unknown to me, Jim was part of the casts of the movie in Maryland, but Ruth didn't tell me.

What I later found out was that Ruth wanted me to hook up with the producer of the movie- and I found that pretty distasteful. When we got to Maryland, Ruth did all she could to steer me in the direction of the producer.

But I was not interested. I was also pleasantly surprised that Jim Iyke, an actor I had earlier expressed a liking to, was also in Maryland, and naturally, I gravitated toward him. Jim and I took an instant liking to one another. We went out for dinner, and I discovered that even though Jim could be very, very arrogant, that he was a softie at heart.

He bombarded me with questions-views on relationships and marriage, and few days later, he asked me to speak to his sister in Africa, and I found myself completely feeling at home with Jim. Since then, I discovered that he was the man of my dreams and we have been celebrating our romance ever since, and what a great guy he has been!

Qualities that attracted her to Jim

“Jim is the most romantic man ever, as far as I m concerned. He is also a great gentleman. Jim is not afraid to say sorry when he did me wrong. In spite of his tough boy image, he is all human and sheds tears like everyone of us does, under certain circumstances. Jim is a planner - very meticulous, unlike me, who is a last-minute person.

He has brought a lot of order in my life, and for that I remain very grateful. We fight like most couples, and yell at each other. I will always tell him to keep the actor side to himself; that he is my lover after all.

He would often laugh and tell me, “Don't worry, you know daddy is not afraid to say sorry.” He makes me laugh. Jim is also exceedingly intellectual. He watches television a lot, especially, the news and commentary aspects of our politics and economy. He is a dependable person and can die for his friends.

He is a sweetheart and my meeting him has made me a better person. Above all, we have a most exciting physical relationship, a department I think is very important in any relationship.”

We don't really have a lot of cultural issues. Don't forget that Jamaican men are very much like the Africans, and our cultural values are very much in sync with those of the Mother Continent.”

Asked to comment on the level of vitriol that has been heaped on her by some women, who thought she had stolen their prince charming, she replied, “ I don't know why they are so angry. I got Jim because I am hot. Because I possess some unique qualities that fit into Jim's relationship schema. If I were a fat and ugly Jamaican girl, I am sure many of them would have had no issues at all.

But because God gave me the gift of beauty, they are all jealous. A lot of African men are married to Jamaican women, and I think it's all good. There are millions of pretty African women out there. But it's just that Jim chose me, and that's that. People should get used to it.”

On women who still want Jim

“You know what? I have heard women tell me to my face that in spite of the fact that I'm seeing Jim, that nothing will stop them from taking him from me. Others told me point blank that they would not only take him away from me, but also would go ahead and have his baby. You know what that does to me?

It motivates me. When they expressed all those feelings, and at the end of it all, Jim returned to my bed, it stirs something in me when we are intimate. It brings out the best in me.

To those women who have those desires on Jim, my message to them is simple: keep fantasying. Too bad I got him where you can't reach. You don't threaten me at all.

You would have to put up your super A-game to take my man from me, and putting up super A-game is part of my corporate definition. I'm a confident woman-that's all I'm saying here. I'm not being immodest.”

“We are definitely getting married. We have discussed and agreed on it. His family has agreed to it, and when the date is fixed, you'll be the first to know. I believe Jim came into my life for a reason. I'm a stronger and better person because of him. I have learned to take things more objectively since I met Jim.

For instance, I had women call my phone to tell me they had just finished making love with Jim, meanwhile, Jim would be lying by my side listening to the garbage.

I have come to understand the destructive side of the human mind, the side that wishes ill on fellow human beings, the side that is eternally desirous and upsetting the apple-carts of people's lives, and it is very disheartening.”

On her topless role in the movie, Crazy like a Fox

“I didn't like it all. It was supposed to be a silhouette of me, topless as opposed to the full frontal depiction shown in the movie.

The room where the scene was shot was also 'smoked'. So I was surprised to see it the way it came out. I called the producer, Tony Abulu, to complain about the part.

But I'm glad that Jim is a consummate professional, and he knows that as an actress, you may be cast in certain roles that may not exactly represent your deeply held values. I am, however, glad that Angel (the Queen of hip-hop videos and I gave a good account of ourselves in that movie.”

It's a great feeling to see the amount of love and excitement the African movie industry - Nollywood has generated within the Caribbean communities in the U.S. I'm glad that I've been privileged to be a part of this cultural collaboration.

I just came back from Antigua for a movie shoot which had the great Jamaican dance hall maestro, Makadaimond, as part of the cast. The movie is entitled, “Redemption of Paradise.” Also, I'm making inroads into the mainstream American movie industry.

I just finished shooting a movie called 'Teen Movie” with Buffle the Body and Rabbit from “Real Chance of Love.” I played a model in the movie. So one has been busy and I'm grateful for the opportunities that I have been given to ply my trade and skills.”

“I support him totally. I know he is going to do very well. Everything Jim touches turns to gold. I'm glad to have seen the wonderful turnout of people for Jim's video shoot. He is multi-talented and this will shine through when the album comes out soon.”