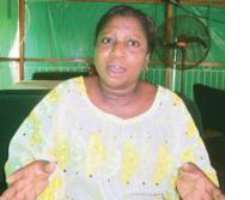 That she is no longer a spinster is no news for those who are familiar with happenings in the Nigerian entertainment circle. Even her broken relationship with a fellow Nollywood actor and father of her only child, Prince Ajibola Dabo few years ago is stale news. But the interesting gist about this 46-year-old movie star is that her marriage to an ex-international footballer and her childhood friend has come to stay for real. The talented veteran actress, Binta Ayo Mogaji-Oduleye beamed with excitement as she spoke about her marriage in a recent chat with http://nollywoodgists.com.

The Ibadan Oyo State-born movie icon said her husband, Ayo Oduleye had, like a prophet, warned that her former relationship would not translate into marriage. She quoted her husband, a psychotherapist, as saying: “I told you that guy would not marry you because I sent some people to him to ask him questions and I know he wasn't going to marry you. Now I will marry you.” That was the statement that heralded a sizzling love affair that culminated in a Nikkai ceremony on Saturday, December 23 2006.

Going down memory lane, the award-winning actress recalled the beginning of her acting career. According to her, she started acting at the age of 16. “I had an elder brother who was a senior lecturer at The Polytechnic Ibadan. He was an actor on NTA and I was in school. He was involved in a TV play, Why Worry. There was a particular role they wanted a teenage girl to come and play and my brother told them that he had a kid sister who was very sharp. They invited me, I went for audition and they picked me. That was how it started and since then I have not looked back.”

After spending three decades in acting, the mother of one turned mother of three, including her husband' twins cannot imagine another job that can give her the kind of fufilment she has got in acting. According to her she would have done something related to acting if she never found herself in her present career. “I never thought of something else. If I have not been an actress, I would still have worked probably with external affairs or something related like Mass Communication, broadcasting. I could have been a journalist or anything. Whatever I could have done would be people related because that is where my passion lies.”

She believes in a brighter future for Nollywood. “People used to see this profession as a business for the lay-about. But I always convinced people that if a whole university setting should put Theatre Arts on their curriculum, and people like Ola Rotimi, Wole Soyinka and so on can get their professorial from it, then there must be something in it. There was no commercial acting when I started apart from those who were working on the TV and how much was our salary then. I was collecting N18 and they would remove tax from it. Acting was a business people didn't believe was a business now it has become an industry.

“The current people who are promoting the English play had seen the prospect in the business a long time ago and they were investing their money in it. But the people in Yoruba sector of it were not seeing the commercial aspect of it. They were doing it for entertainment and popularity. That is why today 70 percent of the Nollywood is dominated by the Igbo people. Now it has become so big an industry that if you find out how much the government is getting from the film industry now you would be amazed. You will be amazed because it is enormous and that is why the government is trying to get involved now,” she said.

By October this year, she will have spent 30 years on stage. “That is to tell you how long I have been in the business. We have been stars before home video met us here. When I look at those people that parade themselves as stars today I sit back and laugh. They gave that to you on a platter of gold. Show your style. You don't work for it. We used to stay in the theatre for six months because we want to do a weekend run of a show and you don't even get paid. I remember the first nine years in my career I was always going back home to collect money. My mum would say, 'They got a job for you in the bank and you rejected it, now see your life.' We would fight. Sometimes she would give me money and sometimes she would not give me. I didn't want to work in the bank. You know, we were deriving satisfaction from what we were doing. We weren't looking at the monetary aspect.

“Where was the money anyway? Some of us got lucky. For instance I was in Village Headmaster, Why Worry and a lot of other series that was running on the TV for a long time. Apart from the satisfaction we had in the job, we were of the belief that even if NTA did not pay, one day they would pay as long as you did not lose your pay paper. So when home video came people were happy. Then I wasn't even acting Yoruba movies. We were the pioneers who started the acting in English home videos. Anta Laniyan, Mofe Damijo, Liz Benson, Joke Silver, Uncle Olu, Uncle Sam Loko, Clara Chukwura, Ngozi Nwosu and myself. While we started out people like Ego Boyo and Richard Mofe Damijo were still in school. RMD was still in school when I started receiving awards.”

I cannot itemize my achievements but I can just say I am grateful to my God that since I started up till today I am still relevant in the industry. Last year, I went to England to collect the Afro Hollywood award of the most outstanding veteran actress and I have been given an Afro Hollywood award for the best actress. That was in 2003.

Ajibola and I have always been friends and we are still friends. We were never married in the first place and we both agreed to be just friends whatever that came up from it. So, I wonder why the media started shouting it that I dumped him and all that. He still remains the father of my child. We still talk as friends. I am married and he is also searching for a wife.

You know I have never been married before. I am happily married now and I thank God that I finally got married. This is also my husband's first marriage, though he already has a set of twins who are now 9 years old. I have known my husband since I was in secondary school. We were playing football together. I was a good footballer when I was a younger person and I am very passionate about football. I met my husband in the days when he used to play academicals. He was born in England but his father brought him to Nigeria to do his secondary school here. He is a medical doctor, a psychotherapist. But back in the days he used to be a footballer. At a time he was a machinery footballer playing for different secondary schools. He was among the team that represented Nigeria in the first world youth championship in Canada. When he came back from Canada he then went back to settle down in England. In 1980s when Nigeria invited five professional players from oversea my husband was among those players. That time they invited Seyi Moses, Tunji Banjo, John Chidozie, John Fashanu and Victor Oduleye, my husband. At that time they were invited my husband was playing for Tottenham. He was breezing in and out of the country but later we lost contact. But you know the will of God must prevail. We met again and he said, “I told you I was going to marry you and I will marry you.” He kept pestering me and said, “I told you that guy would not marry you because I sent some people to him to ask him questions and I know he wasn't going to marry you. Now I will marry you.” Later he asked to see my parents and manipulated them into marriage. We did our Nikkai December 23, 2006.

We did our honeymoon at different places in Nigeria. We travelled to Badagry, Ilorin, Abeokuta. We were just travelling around and did lasted for about two and a half months. Then after that he left. And since then he has always been coming home and if he doesn't come I go there. My husband is a very wonderful man. I won't trade him for anything and if I come to this world I would marry him again. I am glad I am married to Ayo Oduleye.

I am a Muslim. I have always been a Muslim and I will die a Muslim. My husband used to be a Christian but he became a Muslim because of me. His baptismal name was Victor but he has been renamed as Fatai. We did a Muslim Nikkai. And that was three years ago.

I am seeing a very bright future. I want to keep my home and have one more kid for my husband. I already have three boys, my husband's twins and my son. I am hoping to have a baby girl for my husband. That will make my children to be four, three boys, one girl. As for my work, I am still very much in the business. I am now based in England but my work brings me to Nigeria regularly. When I finally settle permanently in England I intend to establish an entertainment outfit there.