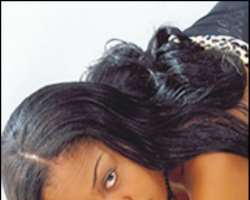 Star actress, Nkiru Sylvanus is a house hold name in the Nigerian movie industry. She came to Nollywood as a teenager with the movie titled 'Out Of Cage' but the movie that brought her into lime light is “A Cry For Help”.

The Ngwa, Abia State born actress who has had her fair share of controversies is on the news again. This time it is the alleged romance with one of the hottest dudes in Nigeria music industry, Asha. According to rumour mongers, the Dami Crooner and American returnee has been found around this widely admired actress in recent times.

The story also has it that she is also all over him. Asha and Nkiru are said to be the latest love birds in the entertainment industry. Although sources say both of them are shying away from admitting the truth, a close friend of Nkiru claims that these two have been in affairs for a long time.

A source that admitted being close to the beautiful actress refused to explain how intimate their relationship is.The story went further to say that the actress has finally relocated to Lagos for a healthy and closer relationship with the tall and handsome Asha.

It was gathered that when Nkiru was confronted with the story, not only did she refuse to discuss the matter at length, but also denied ever knowing who Asha is. She equally debunked the story of her relocating to Lagos.

It could be recalled that since the beautiful actress came to lime light, rumour mongers have linked her with many alleged lovers, but, she has managed to keep her love affairs secret. The most pronounced love affair she has had involved Pat Attah, a top Nollywood Star. This affair is believed to have positively robbed off on her career.

The actress who had featured in over 60 movies is said to have allegedly abandoned a suitor who has spent much money on her because he was physically challenged. There is another controversy surrounding her alleged romance with a former Abia State Governor.

All these stories, the Enugu based star actress has debunked and she strives to live her life completely outside controversial indulgencies.