‘I’m not a womanizer, people only judge me by what they see on the surface’---Lanre Teriba 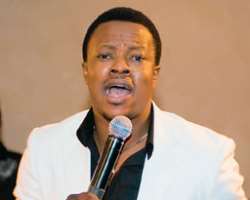 Just back from an extensive playing tour of the United States of America, Lanre Teriba speaks with CHUX OHAI about his trip and his music career. You have been out of circulation for a while. What have you been doing?

I have been away from the country. I went on a six-month tour of America. I have just returned to Nigeria.

What parts of America did you tour?

I toured 22 states in that country. They include New York, New Jersey, Chicago, Minnesota and North Carolina.

It must have cost you a lot of money. Was it a sponsored tour?

Yes. I got a promoter there and I have a five-year deal with him.

Did you tour with a new work?

I toured with King of Kings. I am considering going on another tour this year with Promised and Fulfilled, which is my new album.

I started singing when I was in school. At first, I sang as a member of the Kegites Club when I was a student of the Federal Polytechnic, Offa. Later, I got to know about gospel music when I started attending a Christian fellowship on campus. Many of my schoolmates encouraged me to dump secular songs for gospel songs. They advised me to move closer to God instead devoting my time and energy to singing secular songs. Of course, I listened to them. I tried it and there was a huge difference.

What did you study at the polytechnic?

I studied Accounting. I never planned to take up singing as a profession. You know, I thought that I would end up working in the bank or some other financial institutions. I never believed that I could sing for God too. I just found myself doing it. It was a calling. As they say, man proposes, God disposes.

So you see yourself as a music evangelist?

Yes, I do. I think I had the calling from birth. My mum used to tell me that I was called by God to sing the gospel, but I never believed her. After I left school, I searched for a job for three years and nothing happened. Then, I decided to try singing as an alternative. As it turned out, my first album, titled Atorise was an instant hit and it brought me into the limelight.

Do you sing to entertain your audience or to preach the gospel?

I thought that your kind of music was Juju gospel.

We are saying the same thing.

How did your folks react to your decision to start a career in music?

My parents supported me all the way. Already, they had told me that I was destined to sing. They had said that before I was born, somebody in the church where they worshipped told them that I was coming to the world to sing for God. But like I said before, I did not believe what they said even once. Apart from that, I believed that it was ideal for people to have a modern and refined attitude to life. I always felt that to achieve this, they had to be educated. I believed so much in education, and that was why I had to go to school. My thoughts were far away from singing gospel songs for God at the time.

You could have chosen pop gospel like some of your colleagues have done. Why did you opt for Juju gospel?

They are all the same. Everything falls under gospel music. I can choose whichever style I want to sing at anytime. I may decide to sing pop gospel tomorrow and the next day, hook up with hip hop gospel. The choice is mine.

What personal experience influenced your present choice of Juju gospel?

It hasn't been influenced by any particular experience. Like I said, my kind of music is sort of diversified. I can sing whatever I like. It doesn't have to be juju. My kind of music is distinct and it is in a class of its own.

In case Juju gospel ceases to do well commercially, have you considered adopting another music style to spread your message to your audience?

Right now, I am working on a hip hop album. I just want to do a little bit of evangelism with hip hop music.

Why the switch? Are you abandoning Juju gospel?

I am not leaving gospel music. I am still singing gospel because hip hop gospel is still under gospel music. But if what you want to know is whether I am adopting a new music idiom, my answer is no. I cannot leave the idiom that I am used to. I can only borrow from other idioms to enrich my music.

Do you feel that your message is not getting across to as many people as you desire?

My message is everywhere. But I still need to work harder than ever. You know, we are living in a civilized environment and things are a lot different now. A great deal of the music albums that are being released to the market are hip hop. Although a lot of people still listen to juju and other kinds of music, right now, it is hip hop that is the centre of attraction. A lot of civilized people are focusing on hip hop at the moment.

What has been the greatest challenge that you encountered since the beginning of your music career?

Protecting my image against unprovoked attacks from the media. They called me names and spread damaging stories about my relationship with women. It showed that people do not understand me. They look at the surface and judge me by what they see. I am not a womanizer. I have never been one. So when some journalists started writing that I have been sleeping around with women, I felt bad about it. In spite of the unfair way that they treated me, I still respect Nigerian journalists. But my advice to them is that they need to be factual and fair in whatever they report. Some people don't even have access to you, but they will not hesitate to publish any rumour about you. I don't think that it is professional to behave in this way.

So you have never had an affair outside your relationship?

Then how do you cope with the pressure from your female fans?

I control myself. I am a disciplined artiste and that is what my critics have failed to observe. Music is what I am doing for a living. I don't want anything to distract my career. More importantly, I don't want any woman to destabilize it.

Let's talk about your work-in-progress. How far have you gone with it?

I have finished laying two tracks in the album. Anytime from now, I shall begin the publicity for the single track, titled True love.

Apart from music, what else are you interested in?

I want to invest in oil and gas, as well as to go into politics in the nearest future. We need people who have the fear of God to rule the country. Fashola has the fear of God and that is why he is able to do what he is doing in Lagos.

As an entertainer, do you sometimes get worried about the financial returns from the sale of your works?

Yes. And I am so worried about it at the moment. Piracy is the major problem that is afflicting the music industry. There are singles that I am doing now and I have spent a lot of money on the production. When I think about the threat that piracy poses to the works, I get really scared. I think that the time has come for intervention by the Federal Government. This is the only way that the war against piracy and copyright infringement can be won. The government has to intervene because I have discovered that rich Nigerians are the real masterminds of piracy in this country.

Are you going to release your forthcoming album on a personal record label?

Yes, I am floating my own label soon and it will be called Atorise Music Industry.

How do you intend to prevent pirates from tampering with your work?

I will register my songs. I always do that.