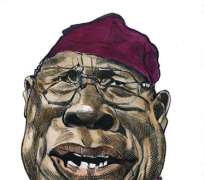 By Henry Umoru
The Federal Government yesterday took a swipe at former President Olusegun Obasanjo, saying that for the hatred he had for anything which related to former Military Head of State, General Sani Abacha, Nigeria would have very vibrant in all its ramifications.

According to the government, Obasanjo killed Abacha Vision 2010 Development plan because he never liked him as a person and he (Obasanjo) went ahead and put in place the vision 2020 even though it was in principle without any concrete effort to prepare the document.

Speaking yesterday in Abuja while presenting the Nigeria Vision 20:2020, which seeks to place Nigeria among the 20 most developed economy in 11 years time, Minister/Deputy Chairman, National Planning Commission (NPC), Dr Shamsuddeen Usman said, “Obasanjo threw away the vision 2010 because he didn't want to hear anything Abacha..

“Vision 2010 failed because it was not implemented. If it were, I am sure- I was part of it, this country would have been a different place by now.

“We need consistency in this country and look out for what is in the best interest of Nigerians. I said this thing elsewhere and somebody responded to me instantly but it is the truth. Vision 2010 was thrown out of the window by President Obasanjo.

As at the time he came on board he didn't want to hear anything Abacha. This is the reality. I think he realised later that we do need a longer term vision (planning) and to his credit, the vision 2020 was initiated.”

According to him, the consistency in policy being recorded in different facets of the country today have demonstrated that the vision 2020 initiative would succeed during President Umaru Yar'Adua, adding that efforts were being made to convince the National Assembly to legislate the vision into law to make it mandatory for successive administration to continue with its implementation.