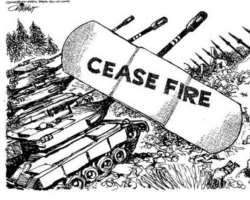 the Emancipation of the Niger Delta (MEND) said Wednesday that its unilateral, 60-day ceasefire may be called off if the military Joint Task Force (JTF) attacks one of its camp in the oil region.

''Barely 12 hours into our ceasefire, the military Joint Task Force has dispatched seven gun boats with heavily armed troops from Warri and are headed towards one of our camps located around the Delta/Ondo state border.

''If this information from a very reliable source within the JTF happens to be true, the ceasefire will be called off with immediate effect,'' the oil militants threatened.

MEND declared the ceasefire Wednesday, two days after its leader Henry Okah was released from almost two years of incarceration and freed from treason and gun-running charges for accepting the government's amnesty offer.