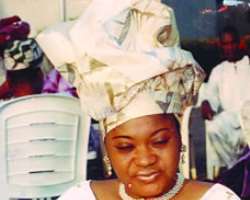 She played the role of Folake, one of Sisi Clara's girl in the New Village Headmaster. Her role in the NTA drama brought her fame and opened doors for other acting jobs. In this interview Kate talks about her acting career, Nollywood and how she survived her cloudy days. Kate Adepegba in her words.

BACKGROUND
I was born into a family of seven. I am the sixth child. I am in my 40's. I attended Maryland Convent Private School for my primary school education. From there to Victory High School, Ikeja for my secondary school education. After my secondary school education, I spent two years in a continuing education centre in Abeokuta. I later joined the Nigerian Tobacco Company. I worked with the company for a while before I joined the cast of Village Headmaster. Before I joined the cast, I had done some acting in some of the episodes of The Armchair Theatre which was one of the Nigeria Television Authority Channel 10 drama programmes. In 1983 I started acting in The Village Headmaster. I got the part of Folake, one of Sisi Clara's Sewing Institute girls.

ACTING CAREER
I have always wanted to be an actress. At a point I wanted to be a linguistic. I read French language in school and I was one of the best students in my school. I had also lived in Porto Novo for a while. I did some courses in French language while I was there. I wanted to be an interpreter. My father gave me a lot of encouragement. When my father died my dream of becoming an interpreter died with him. I had no money to pursue my dreams further; my mum had all of us to take care of and we were very young at that time. I walked on to the set of The New Village Headmaster one day and right there was Uncle Funsho Adeolu.

While my father was alive we lived in the same neighbourhood. He was the one that introduced me to Dejumo Lewis the producer of the television programme. One thing led to another and I got the role of Folake. I also featured in one of the best soap operas on NTA Mirror in The Sun. I was a cast of The New Village Headmaster from 1983-1988. While I was on The New Village Headmaster I also featured in other television programmes. I was on Turning Wheel, a Jab Adu production. In May 1988, I left Nigeria for London and enrolled at the London Academy of Administration Studies. I read Business Communication at the Academy between 1988-1992. I came back to Nigeria in 1992. Back in Nigeria, I featured in some episodes of Checkmate. I also starred in Violated and later did some episodes of Palace. I also featured in some home videos.

CHALLENGES
What I earned from New Village Headmaster was N90 per episode. And the role I played was not featured every week of the 13 weeks which makes a quarter. I had a brother in America and a sister in London. And three of my siblings had sickle-cell. So I knew it would be too hard on my mother. There was no way she would have been able to cope with all that and also paying my fees in the university. I just felt it was better for me to work, so I can raise enough money to fend for myself. So I decided it would be easier for me to go into acting. I also did some buying and selling on the side to help pay my bills. Also while in school in London, I worked part-time to help with my tuition fees. Going abroad for me was to get educated so I can live a better life. I had no intention of living abroad. I had a son that I left with my mother. Leaving him to go to the United Kingdom in the first place was not easy for me. I had no choice. I wanted to make something of my life so I had to take that decision.

RELATIONSHIP
As a matter of principle, I don't talk about my relationships. My son is in his twenties he is a big boy now. I had him while I was in secondary school. But unfortunately his father died before he was born. My parents were not happy with me for that. But I told them that was what I wanted at that time and I assured them that my pregnancy was not an hinderance from achieving my goals in life. I was 16 years old when I had my son with his father dead. I knew I had to wake up to my responsibilities to him as my child. I knew I had to strive to be a role model. I concentrated on my education and I excelled. I knew I needed to attain a certain level for me to start thinking of going into a relationship. So I never really got into any kind of serious relationship until I travelled to the United Kingdom. And the relationship I had at that time was a set back for me. I was in the relationship for a couple of years and it really didn't work out. He was unfaithful to me. I stayed off men until I later met somebody else in London. He doesn't live in London he only came on holiday.

I once dated an actor, years back. But it was not an interesting affair. And I will never do that again. I went out with him while we were both a cast of the New Village Headmaster. That relationship was not what I wanted for myself, but for me to know if it was right for me or not, I needed to be in it. The relationship lasted a year. I was a young girl at that time and I was a bit gullible. It had nothing to do with love. I was never in love with him.

MARRIAGE
I see marriage as something that is ordained by God. It is all in God's hand. At His own appointed time it will happen. I don't believe in pushing for anything. I believe in things happening naturally. Besides I don't see marriage as a big deal. Friendship is more important. We started out as good friends and we still are that is more important to me. If God says marriage will come it will.

NOLLYWOOD
The Nigeria movie industry has come a long way. A lot of changes have taken place. Nigerian artistes are hard working. We now have a lot of professionals. Acting is now on a different level from what it used to be. The exposure is more than what it was back then. Then there were no awards. We didn't have people living abroad calling us to come receive awards. But now, there are so many awards both at home and abroad. They have more opportunity to be exposed internationally than we had.

SEX FOR ROLE
Honestly an actress will be slept with if she wants to be slept with. I remember back then the actors and actresses I worked with were professionals not mediocres. I worked with the likes of Femi jarret, Jab Adu just to mention few. So when I hear about sexual harassment in the industry it baffles me. And it doesn't have to be like that if you don't want it to. Not all movie producers and directors sexually harass actresses. Sexual harassment is not restricted to the movie industry alone other industries are no exception