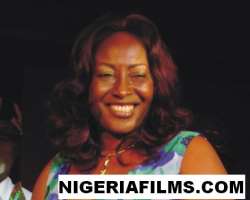 IT COULD have been better than this. This was what popular Nigerian actress Patience Ozokwor — aka Mama Azuka-said on her way back home yesterday after what had otherwise been a trip to remember.

She almost missed her Ethiopian Airways flight following an administrative hiccup, which resulted in her male colleague being forced to stay behind.

He is now expected to leave Harare on Wednesday.

Mai Azuka did not hide her displeasure and publicly threatened not to return although she later managed to travel to Ethiopia where she was expected to connect to Nigeria.

The "Big Mama" of Nollywood, better known as Mama Azuka, had been in the country for the past week as part of the Zimbabwe Tourism Authority's popular Celebrity Host Programme.

She even graced the Zimbabwe International Trade Fair held in Bulawayo and toured the country's premier tourist resorts courtesy of ZTA.

After her mission, the ZTA saw it befitting to give her a dignified farewell and it came in form of a gig dubbed "Mai Azuka in Concert" at the Rainbow Towers Main auditorium on Thursday night.

After all, Mama Azuka is also a musician and she was supported by Alexio Kawara, Mbira DzeNharira, Nicholas Zakaria and reggae crooner Mic Inity.

The gig was also meant to give fans an opportunity to interact with their idol while the Harare media was expecting one-on-one interviews with her as previous attempts to do so earlier in the week were scuppered by people around her.

She was either tired or too busy to engage the media. Thursday night's event was neither a flop nor a hit given that the beginning was marred by poor sound while the performers went on to give it their best.

The gig was supposed to start at 7 p.m. but by 9.00 was time for sound check. Being a mid week concert, many had hoped that it would start on time.

But the organisers defended themselves saying the auditorium was booked and they only got their slot later.

The poor sound affected Mbira DzeNharira's opening act was greatly affected although the mbira maestros did their best and defied the odds.

Their presentation, which ranged from story-telling, traditional drumming and acoustic, was a marvel to watch although sound messed up their act.

They played such numbers as Toenda KwaAmbuya, Ndomuwanepi, Karimudande and Kumaziva Ndadzoka but their performance came to an abrupt end at 10pm when Mama Azuka walked in amid a rapturous reception.

Revellers drew closer to the VVIP stand where Mama Azuka had a seat for a spontaneous photo session before ZTA boss Karikoga Kaseke intervened and cleared the stage.

Mama Azuka was then officially introduced to the audience by Minister Mzembi who even joked that had re-christened himself Baba Azuka.

The minister, who also spoke high of ZTA's Celeb Host Programme, urged Mama Azuka to spread the message on Zimbabwe's hospitality when she returns to Lagos.

After speeches, Alexio Kawara took to the stage at 10.38pm and Minister Mzembi and Mama Azuka thrilled fans on the dance floor. The Nigerian actress gyrated with Alexio on stage much to the delight of revellers.

Madzibaba Nicholas Zakaria also had a good show and the peak of the night came towards midnight when Kaseke afforded fans an opportunity to ask Mama Azuka burning questions they had over the years.

The segment was dubbed "Mai Chisamba and Mai Azuka Show."

It was during the same segment that journalists got an opportunity take down some notes as fans exhausted all the questions they had.

Asked of her marital status, she said:

"Right now I am a widow and I have three biological children and I have adopted one because I needed more children especially when my husband passed on.

"Patience is different from Mai Azuka you know (from her various roles on Nigerian movies). She is hard working. I do so many things in life. I was once a radio announcer. I am also a fashion designer.

"I love entertainment and that is why I do music, acting and designing."

She also spoke about her experience in Zimbabwe. "Zimbabwe is a beautiful country with a lot of potential to be harnessed, I have also come hear to harness that myself.

"My stay here has been quite an experience. I was taken to Victoria Falls and I saw some elephants there."

On her achievements so far, she explained: "I am very comfortable. The (film) industry is rewarding in Nigeria. So far, I have acted in more than 200 movies and feel I have not started yet. I will also take part in The Zimbabwe I Know." After the question and answer segment, Mic Inity took to the stage but unfortunately many fans had already left the podium given that the drawcard was Mama Azuka.