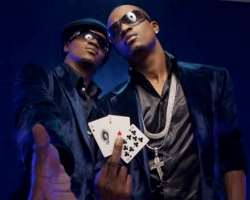 Q: After the Game Over album, your fans have been clamouring for a new stuff from you. What are you guys up to at the moment?

A: Right now, I won't say we are cooking or working. We are trying to observe what is going on in the market now. There is a whole lot of stuff coming out in the market now, so we want to relax a bit and give the upcoming artistes an opportunity. We don't want a situation where only the A-list artistes will be dominating the market. We want to give them space to express themselves. I'm not saying that we are not working, but people should keep their fingers crossed

Q: How long will your fans have to wait?

A: I don't want to let the cat out of the bag because it is going to be a surprise. It may be today or tomorrow.

Q: How would you describe the success of Game Over?

A: Game Over is an international album, but I can't talk about it without the Get Squared album. The Get Squared album gave us a proper introduction to Nigerians, while Game Over took us beyond this country. I can remember that we dropped the album in November and by December, when we travelled to perform in Zambia, people were already singing all the songs. There is nowhere in the world that you won't find Game Over, even in Japan and China. When we perform at concerts here, we get about 4,000 people, but out there, we get as high as 40,000 waiting to see P-Square and some of them are not even blacks. So, Game Over is a huge success.

Q: Why do you think you guys were able to conquer the continent?

A: I don't even know. Before, we used to tell people that we do Nigerian R&B, but now, we simply tell them that we do good music. The fact of the matter is, we have our target audience. People don't just like P-Square because they can sing, dance or are good looking, it is due to the quality of our music. P-Square is not singing for Nigerians alone but for the entire world.

Q: What plan do you have to take your music to Europe and America, just the way you've done on the African continent?

A: Let me say that the Last Night album was to introduce P-Square. We used Get Squared to catch Nigerians. Game Over helped us grab Nigeria and Africa as a whole, so with our new album, we want to grab the whole world. That is exactly what we want to do. Music has got to the level that every artiste must be versatile. It's like football, you can't say because you are used to rough grounds in Nigeria, then you can't play on a smooth pitch. If you want to be an international footballer, then you must play like one.

Q: At the moment, how popular is your music in other continents?

A: Based on what people have seen and said, I think we are very popular. It's just that we don't make a noise about these things in the press. We did a show in Dublin recently and we were not expecting more than 2,000 people, but to our surprise, over 8,000 people came. Ninety-five per cent of them were whites. In countries like Spain, Ireland and America, we can't go for shopping without people running after us for autographs and all that. The way we go out with security here in Nigeria is the same we do abroad.

Q: Is it right to say you guys are more popular out there than in Nigeria?

A: I don't want to say that because Nigerians made us who we are. Nigerians showed us love and permitted other people to love us. We are popular in Nigeria too, but it's just that a prophet is not always recognised in his country. Another artiste they know out there is Tu Face and after that, you will be surprised that it is Danfo Drivers. You may be surprised at this, but it is true.

Q: How do you see the future of P-Square?

A: We are young guys that people look up to. I can tell you that even elderly people still look up to us. I always feel elated when people as old as 70 and 80 years walk up to us and say 'I'm very proud of you guys'. The future, for us, is to remain at the top; we don't want to lose focus. We don't want to get to a point where we will be feeling too big because of our popularity. I want the future to remain the way it is at the moment. We also want to bring in new artistes and as you know, we are already working with a group called Bracket. We are not bringing them up so that they can be on our record label, we are only trying to make them grow. There is nothing like being independent, so we don't want to tie anybody down with contracts. Look at what we did for J -Martins and he is not on our label. We have done it for J-Martins. Next on the list is Bracket.

Q: Considering the fact that you guys have not done any collabo before, people were surprised to see you feature in J-Martins' song, Good or Bad?

A: We cannot just feature in people's songs because they are popular. We prefer to see you and call you for a collabo than you calling us. The reason is that there are certain qualities we look out for in artistes. If you want to do a collabo with P-Square, we must take time, sit down together and work very well on the song.

Q: New artistes are coming up in the industry by the day, are you guys threatened?

A: The sky is big enough for all birds to fly. The industry is big enough to accommodate as many artistes as possible. We are not even enough yet. The only thing that gives me some concern is that some of these people don't even have the talent.

Q: If you have the chance to change something about the industry, what will that be?

A: Piracy. It has been a very big problem to the industry. However, it can only be minimised because even in America, they cannot stop it.

Q: A lot of artistes are popular here in Nigeria but not abroad. Why is it so?

A: I don't know. Maybe it's because most times, people do songs that are for Nigeria. They make music that will just end here; music that cannot travel abroad. I won't say it's the language because music is about rhythm. Afterall, the likes of Sunny Ade sing in our local language and are still popular abroad. Proper packaging is also a good factor that will determine that.

Q: What is the secret of P-Square's success?

A: We have a wonderful team. The Peter and Paul you know are not above mistakes. We learn everyday. Even from the questions you've asked so far, there are certain things I have learnt from them. We are brothers, but that doesn't mean we don't quarrel. But at the end of the day, we argue for things to get better.