Timaya , Empress Show Their Love For All To See 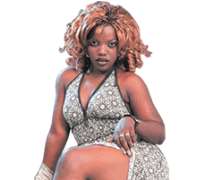 Music crooner, Timaya, can no longer hide his love for Nollywood actress, Empress Njamah. The lovers were seen enwrapped in each other's company. Happy and comfortable in his hands, the actress flaunts her love and affection for the musician, who both have been seeing each other secretly for the past few months.

The lovers were sighted at the Kingsley Okonkwo, KC of KC Presh's birthday at the Nu Grotto, on Etim Inyang crescent, Victoria Island.

The lovers were among the first set of guest to arrive at the occasion. The couples were obviously out to make the best use of the opportunity, to show how much they were in love with each other.

Timaya remained the photographer that he is first from Niger-Delta and would have smashed the camera and the press will only write about him in the news paper.

We beg uncle Timaya not to unleash the Niger-Delta force in Lagos oh!