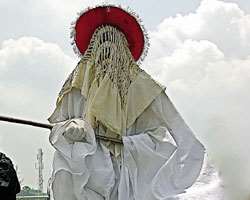 History, culture, glitz, tourism and excitement among others would blend tomorrow, Saturday, April 25, 2009, in what is anticipated to be a perfect atmosphere of elevated funfair, as the government and people of Lagos host the world in a colourful Eyo festival. In fact, back at the middle of the week arrangements were at final stages for the official unveiling of the traditional, exclusively all-white masquerades known as Eyo to treat the international audience to an almost endless thrill.

The preparations which started some months back saw leading initiates of the Eyo fraternity presenting the governor, Babatunde Fashola with the traditional iconic staff of the masquerade, Opambata, at the State House, Marina last Sunday, April 19, 2009. The occasion, known as Ikapa, witnessed the offering of special prayers for peace and prosperity of the state. It was followed by similar ones with the other four Eyo conclaves participating. According to the order of presentation, the Alakete Pupa Conclave, Eyo Laba or the Royal Eyo, presented the staff to other prominent indigenes of the state on Monday while it was the turn of the Eyo Oniko Conclave on Tuesday. Eyo Ologede and the Eyo Agere Conclaves took turn to perform the same feat on Wednesday and Thursday respectively. Friday is dedicated to the arrival and reception of guests, especially international tourists who have indicated intentions to attend the festival.

Speaking at the Sunday edition, Tunde Balogun, Commissioner for Home Affairs and Culture observed that the Ikapa ceremony is a crucial aspect of preparations for the traditional festival. According to him, "It is traditional for them to come to pay homage to whosoever is the head in Lagos Island and the Governor happens to be the highest ranking person. They have come to do what is called the Ikapa ceremony which precedes the Eyo Festival"

Top Lagos musicians are expected to add extra entertainment value to the festival. Top on the list are K1 De-Ultimate, Wasiu Alabi Pasuma and some Agidigbo groups amongst others.

This special edition of the festival which runs on the bills of the State Government with a good dose of support from telecoms giant, Globacom, is to honour late Theophilous Owolabi Shobowale (T.O.S.) Benson, Nigeria's foremost Minister of Information, Broadcasting and Culture. Programmes of event have been scheduled to commence at exactly 8a.m. at the expansive premises of Tafawa Balewa Square (TBS), Onikan. The gate is free.

Expectedly, areas encompassing Lagos Island would inescapably get flooded with Eyo masquerades from different families while commercial activities shall be grounded to a halt. The characteristic heavy traffic of the Island would equally take a break on Saturday to pave clear routes for the Yoruba masquerades, reputed to be about 300 years old or thereabout.

To make the event a well-attended one, the state government had announced some days back, a complete waiver of fare on the Bus Rapid Transport (BRT) buses plying the route leading to the Island from anywhere in the state.

In similar vein, particularly for the purpose of ascertaining premium participation and performance of the masquerades, the Babatunde Fashola-led administration has revealed its packages of monetary rewards for the participants. According to information, the government disclosed at a meeting earlier that families with exceptional performances at the parade will be awarded N1 million, N750, 000 and N 500, 000 for first, second and third positions respectively.

Unlike earlier editions of the festival where participating Eyo masquerades only paraded the streets of Lagos without any formal coordination, this year's ceremony would feature all masquerades parading within the confines of a defined area. Hence, the characteristic disorderliness of the festival, which in the past, usually culminated into panic for Lagos residents shall have no place in tomorrow's festivities.

In fact, the State Government has guaranteed adequate security for the citizenry during the one-day event. According to Balogun, the government has put in place a machinery to ensure the security of people throughout the festival while special routes have been designated for the masquerades and others for visitors and tourists alike so that there would not be any unnecessary contact between the two.

According to him, "If you take the inner and outer Marina, you will not come in contact with the Eyo. If you come through the MUSON Centre towards the Tafawa Balewa Square, which is the centre of activities, you will still not encounter any of the masquerades."

Balogun, however, warned people wanting to watch the ceremony, to observe the rules of the traditional masquerades, which include not putting on shoes, carrying an umbrella or riding an Okada.

According to legends, the Eyo masquerade and later, festival as it is known today, is a culmination of what Ejilu and Malaki, both brothers to Olugbani, the Olori (Queen) to Oba Ado, the first traditional ruler of Lagos to have his seat of government at Iga Iduganran, brought to Eko in the yesteryears.

Oral records indicate that the two brothers organised some masquerades, precisely a retinue of Adamu Orisa including Adamu, Oniko and Ologede, for a ceremonial parade as their own contribution to the funeral of Oba Ado who had passed on. The objective was not only to add glamour to the funeral procession but also as a hounour to their deceased in-law. However, according to some historians, the trio, Oniko, Ologede and Adamu did not all appear on the Lagos scene simultaneously as Oniko arrived first, then Ologede and lastly, Adamu.

The order upon which the three masquerades were brought to Lagos has since been the order of their outing on each Adamu Orisa play-day. It is a taboo for Adamu to come out without due notification that Oniko and Ologede had earlier paraded the streets, and visiting the various shrines in the early hours of an Adamu Orisa Day.

It is necessary to state, for clarifications that what Ejilu and Malaki introduced or brought to Lagos were three Orisas (that is, Adimu, Oniko and Ologede) excluding the Eyo as it is had today.

The Adamu Orisa-play continued in Lagos even after the demise of the two brothers and their sister with the three Orisas as the only set of masquerades, but in a bid to further protect the three Orisas and control the surging crowd which had come to be identified with the festival, the idea of the present-day Eyo masquerade in white flowing robes (Agbada), clutching the trade mark iconic staff, Opambata was conceived.

With the approval of the then Oba of Lagos, the idea was implemented and a number of Eyos in white Agbadas came out on the Adamu Orisa Day at the Oba's Palace and six each were allocated to each Orisa for its security. The Eyo Group became known in later years as Eyo Oba, Eyo Laba or Eyo Alakete Pupa.

The late Chief T.O.S. Benson in whose honour tomorrow's festival is convened was a lawyer and first generation political leader. He was called to the English Bar at the age of 30 and immediately entered into the rough political terrain upon his return to Nigeria. He served as a member of the Lagos Town Council between 1955 and 1958 and also as a delegate to the Nigerian Constitutional Conferences in London in 1953, 1957 and 1958.

The late legal luminary was an elected member of the House of Representatives between 1951 and 1959 where he became Chief Whip between 1954 and 1959. He rounded off his public service as the Federal Minister of Information and Broadcasting until the First Republic collapsed on January 15, 1966. He was married to Chief Opral Benson, the Sisi Oge of Lagos.

The once-in-a-blue-moon tourists delight held last in 2003 as part of the passage rites of the late Oba of Lagos, Oba Adeyinka Oyekan as the traditional festival does not hold on an annual basis, as most other established festivals in Nigeria. The event only gets observed to hounour deceased prominent Lagosians or for the celebration of very special occasions or in welcoming globally acclaimed respected individual on a visit to the Centre of Excellence.

Meanwhile, all is now set for top soft-sell journal, Encomium magazine's Black-and-White Ball billed to hold on Sunday, April 26, 2009 at KFA Events Place, Lekki, Lagos. The event is scheduled to incorporate the presentation of 900-page, three-part, all-gloss compendia dubbed, A Decade Of Encomium, 1997-2007. The special publication is aimed at celebrating the best of Nigeria, capturing for posterity the flavours and colours of a definitive decade, in the process serenading the playmakers, most of whom are expected at the ball.

Scheduled along the lines of strict black-and-white dress code, the ball shall equally feature the duo of Kennis Music's Kenny Ogungbe (Keke) and Dayo Adeneye (D-one) as co-anchors of the special limousine champagne soiree, already arranged as part of the ball. According to the organisers, the showbiz gurus "will ensure that the champagne party sizzles and bubbles for as many guests as possible to enjoy the limousine's ride with their flutes dripping with champagne."

One unique thing that cannot be taken away from the much-anticipated ball is the magazine's publishers' creative decision to make it an all-round African flavour as exclusively African dishes would be served. It shall be a departure from the regulars, moving away from the norm at high-octane parties where continental dishes are favoured ahead of local delicacies.

Top rated artistes and comedians are on hand to thrill the audience, which shall be drawn from all walks of the Nigerian nation, including business, politics, sports, fashion, entertainment, medicine and the media among others. The enigmatic couple, Tunde and Wunmi Obe (TWO), the Eboni band led by God Bless, Jedi, and others would be on the standby thrilling audience to their creative theatrics.