My beard is not for rituals —Emeka Ani 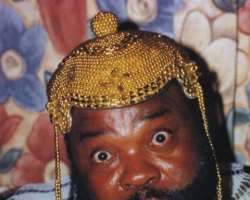 He is either playing the notorious herbalist you see in the African movie channel on DSTV or the heatless father. His roles are numerous but one thing is sure, he is the actor you can't help but love for his delivery and interpretation of each character he portrays at every point in time.
In this interview with http://nollywoodgists.com; Emeka Ani, takes us into his pains and happiness. Exerpts

How would you rate the AMAA?
The event is a good idea that has come to stay. It is relaxing and a rendezvous to meet your colleagues that you only see on the screen. It also affords you the opportunity to market yourself on a one on one basis.

What would you attribute to the series of deaths in the entertainment industry in Nigeria?
Artistes should take life easy, most artistes think they are immune against certain accidents and illnesses but they have forgotten that they are human beings with blood flowing in their vein.

What informed your decision to grow bushy beards?
People have insinuated about this beard a lot. They have carried rumours that I left my beard for purpose of ritual, which is blatant nonsense. My beard is not for rituals. It is funny, I have always wondered, If that is the case, they should leave theirs too and make money with it.
They have even carried another rumour to the effect that my beard is a sign that I am a member of embattled Rev. King's church.

I am using the this interview as an avenue to set the records straight and I want every one to know that I have been keeping my beards for over thirty years. My doctors advised me against shaving them because my skin is very sensitive to razor blade.

Who in the entertainment industry would you consider your closest friends?
Sam loco Efe is number one, he is frank and friendly, the next person is the late Oliver de Coque, I was even doing business with him at a point in time. I have so many friends but it would be unfair if I call some and I don't call on the others.

Can you act nude in a movie?
Of course yes, it must be a good and educative movie that even when people buy and watch it, they would have all the reasons in the world to justify the action. I can act nude if the reasons and the money is right. First and foremost the reason for acting nude must be a million times convincing before the money.

What do you think it would take to bring Nollywood back to its former glory?
One, we need Poetic script writers, thrilling movie producers and creative movie directors and not just some half baked, stale tasting, and out of tune so called Professionals that does more shouting to intimidate than doing what they were employed to do. Sound is still a challenge, so also is lighting. I am yet to find a movie that has a sound track that can be played both on Radio and T.V.

Your most painful moment.
The day I lost my mother and the day my friend Oliver de Coque died. I have had so many painful moments in life but God has kept me on. I remember when I used to walk the street of Lagos looking for any opportunity to star in one movie or soap. But life is a lot easier for me now.