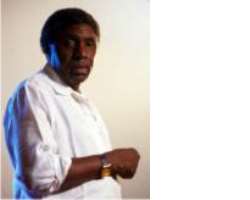 It is probably no longer news to report that the mercurial legend, Bongos Ikwue, is returning to musical creativity, after more than twenty years of 'stepping aside' in favour of the life of architectural artistry or a contractor, if we must be vulgar. He has, according to newspapers reports, held the Come-Back Celebration Night at Otukpo in Benue State.

This is indeed a very exciting and a damn good news from that corner of Nigeria although Bongos cannot be appropriated by Idomaland or any ethno-racial or religious groups for that matter because, as a creative artist, he is a property of the world, not of his ethnic or religious identities or even of his own family.

However, this does not destroy the cultural factor or the fact of the Idoma universe in his creativity. This is a controversial claim in that we all carry multiple identities. Interestingly, Bongos has demonstrated his sense of Idomaness and this is manifest in his Idoma musical numbers and titles like "Otachikpokpo", "Eche Une", "Ella Kunogo", "Owuno" "Ihotu", etc.

If the Idoma were a majority ethnic group, these numbers would have been appreciated more than the ones rendered in English such as "Still Searching", "Cockcrow at Dawn", "What's Gonna be Gonna be", "Amen" etc which are not as deeply philosophical as the ones rendered in Idoma. Unfortunately, Idoma is not a majority cultural or language group. In fact, it is part of the cluster of communities and people defined as constituting the periphery of the (Nigerian) periphery of the (Western) centre.

Like every other theory, centre-periphery theory has its own limitations. Be that as it may, the point is that, by the nationality configuration of the Nigerian state, the Idoma constitute a minority. With a total population hovering at only about two millions in a nation of ethnic nationalities like the Hausas, the Fulanis, (there is nothing like Hausa-Fulani); the Igbos, Yorubas, Ijaws, Tivs and their respective Diaspora, the minority status of the Idoma is beyond argument.

This is not to accept the demographic sense of minority because the concept of minority can only be understood in power terms, not in numerical terms. For, there are what is known as historically dominant minorities such as the Fulanis and the Afrikaners. Even the Idoma are not doing too badly given its qualitative presence in the military, Judiciary, academia, Diplomacy, Bureaucracy, media, politics and the professions. But it is only a qualitative or intrusive but not a historically dominant minority.

As with all groups perceiving themselves to be minorities, the Idoma feel weak, marginalized and dominated. So, they keep devising and demanding guarantees such as the creation of Apa State, an ancestral name taken from its base in the extinct Kwararafa Confederacy. There is nothing wrong with creation of new states as a diversity management therapy except that state creation can no longer mitigate diversity crisis in Nigeria any more because the crisis has escalated already.

Apa State or not, the point is that the Bongos Ikwues of this world are, today, strategically located in relation to both Idoma cultural essentialism and to its Dialogue of Civilizations. In Bongos's case, this flows from his mastery of Idoma cosmography and the creative utilization of same in both English and the Idoma language, thereby becoming the only communicator of cultural authenticity alive whose message cuts across class, gender, generational, linguistic and geo-political diversities in Idoma land.

In the age of the CNN and home videos when our own children cannot speak their mother tongue, it means Bongos Ikwue, via his musical numbers rendered in Idoma language, is the only source of and inspiration in the language itself. This is particularly so as there are no Idoma language newspapers, no essentially or predominantly Idoma language radio or television stations. Even the Idoma translation of the news on Radio Benue is so incoherent and almost incomprehensible if you did not listen to the English version previously.

Meanwhile, television has killed the culture of "tales by moonlight" by which young people are inducted into communal consciousness. This is the case in the urban centres while "albanti" (free sex) has taken care of that in the case of the villages where television is not the dominant culprit. In a way, scholar activist James Petras must be right when he claimed that "In the contemporary world, Hollywood, CNN, and Disneyland are more influential than the Vatican, the Bible or the public relations rhetoric of political figures".

I rely on the authority of my lecturer in Language and Conflict at the University of Ibadan, Professor Iwara to assert that any child who cannot think in his mother tongue cannot think properly. Yet, the reality is that most mother tongues in Africa are dying. They are overwhelmed by Hollywood, CNN, and Disneyland, hence the lamentation by some scholars that "…the declining African countries are today under an electronic siege, …The very fabric of our societies is being rewoven or ripped apart as a result of new technology in information".

This is a terrible certainty in the age in which it is claimed specifically by Samuel Huntington, the American scholar of civilizational determinism who died recently, that "The most important distinctions among people are not ideological, political or economic. They are cultural. People and nations are attempting to answer the most basic questions humans can face: who are we? And they are answering that question in the traditional way human beings have answered it, by reference to the things that mean most to them. People define themselves in terms of ancestry, religion, language, history, values, customs and institutions. They identify with cultural groups: tribes, ethnic groups, religious communities, nations and, at the broadest level, civilizations. People use politics not just to advance their interests but also to define their identity. We know who we are only when we know who we are not and often only when we know whom we are against".

Without agreeing with Huntington's seeming rationalization of cultural essentialism, the question is still that of how do we know who we are as a pre-condition for relating with who we are not within the context of peaceful co-existence. This is where artists who have the mother language power like Bongos Ikwue comes in, whose creative competitiveness in the invocation of the idiom, icons, totems, rites, pathos and similar existential vistas of the Idoma world and fitting them into timeless themes of love, survival, death, mourning/dirges recreates the 'paradise lost' and, therefore, civilizational continuity. This is the strength and sobriety of his music in Idoma language.

That is also why Bongos is the inheritor of the musical tradition in Idomaland pioneered by such people as Barrister Joe Omakwu who sang the classic, "Achenche". He, along with others like Joe Akatu, Ada Atama (aka Joe Onyela), Igbe, Ichicha, Peter Otulu, Oleje Oona and the masculinist Oglinya dancers from my own native Edumoga constitute the referents in cultural creativity in spite of differences in genres and creative impulse between them. Idomaland is now worse that almost all of them are gone by way of death or their exclusion from the stage by a more muscular modernity.

The late Joe Akatu, for example, had a wonderful repertoire of Idoma proverbs and which he wove either in making a hero of or ridiculing anyone or any action from the point of view of the moral categories of good versus bad. Above all, he could mimic his fellow musicians in Tiv, that being how I came to know that there was a Tiv soloist famous for saying that "the dead does not weep at his own funeral". The late Akatu's musical praxis is, therefore, a refutation of the impression of hostility between ordinary Idoma and Tiv people. That certainly came with us, the elite and our manipulation of cultural differences so as to gain political power.

The Idoma have been most unfair to this artistic representative of that nationality. This is because it is doubtful if there are many Idoma people today who have preserved much of Akatu's musical numbers. At Otukpo where his music is sold, it is by an Igboman who, obviously does not understand the language and is, therefore, incapable of knowing when one track has ended and another has started. Buying Akatu's records from him is, most times, buying mumbo jumbo. But even then, he deserves an Idoma national award for doing what an Idoma man should have taken up. This is more so that Radio Benue's collection of Joe Akatu's records is miserable, reflecting our general lack of preservation and documentation of records in Nigeria. I have no idea of what it could be like in Joy F. M at Otukpo which is a rather recent creation whose acquisition may not extend beyond its year of birth.

We need these culture bearers because even as dynamic as culture is, the cultural ingredients do not perish. We remain prisoners of lived experiences, especially the experiences of the earliest years and its lessons on the big question of what is right and what is wrong. The media, peer group and religion may influence the cultural comprehension and praxis of this question later in life but they rarely add or subtract much from it or we wouldn't have to contend with the reality of the haunting bodyguard of conscience.