Men are tender, I handle them like babies — Benita 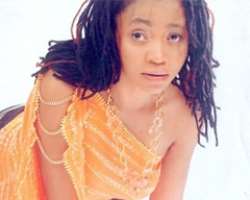 Seductive Queen of the screen Benita Nzeribe is every man's delight, both off and on screen. Considered a sex bomb by many, she wouldn't hesitate to tell you that the only way she's learnt to ward off the advances of her lecherous male fans, is to handle them like babies. “Men are like babies and you need to handle them carefully so they don't get pissed off” She tells Bridget Amaraegbu in this interview. Hmm, want to hear more of this, just read on.

Recently you were on location in Rivers State, what was the experience like?

The location was in Ogoni and it wasn't easy. It was actually my first time in Ogoni land. The movie was an epic movie and usually epic movies are very stressful, but we got along. I had to learn their language because we were given a language instructor. Though the movie was an English movie, but in between, I had to interject with one or two Ogoni words. But that was not a problem because the instructor was there to remind me on when and how to use it.

So you can now speak Ogoni language?

(Laughing) No, I've already forgotten all the ones I learnt there.

Did you get to see any of those militants we see on TV?

(Laughing) I didn't see any militant. I only heard stories of their operations.

In one word, how would you describe the garden city of Port Harcourt?
I'm not just using one word. The garden city is a very busy and crowded city. They also face the traffic situation we experience in Lagos.

Were you scared at any point during your stay there?

With the kind of stories I heard before going there I should be afraid. But in my heart, I knew that the good Lord that took me there will definitely bring me back. So I wasn't afraid of anything or anybody.

Honestly I was excited while I was there because I saw so many places I never saw before and the people were hospitable.

Epic and traditional movie, how were you able to fit in?

Haba! Don't I look African. They made me wear their traditional hair do, clothes, tatoo and black lips. In the end, my character was that of a queen.

Do you consider such roles challenging?

Every role and character has it's challenges no matter how short the script is because you really have to put in your best to live out the character. That is why, sometimes when we move around on the streets, people keep saying, we are wicked or nice because of a certain character we may have played in the past.

They are able to see this because whoever played that role did it well.

Still talking about roles, most times you play seductive roles. Do you prefer such roles?

Is not about preferring a particular role but the character which you are being cast into. Your director will have to cast you to a particular role or character depending on your acting ability and what he thinks you can do. Sometimes too I play emotional roles and other times when there is a real harsh role and nobody wants to take it up, I'll volunteer myself. But once the camera is off, I'm back to my person. I don't live my life one second into any movie role. No.

Your seductive movie roles have the tendency to attract the men in their droves, so how do you handle your male fans?

You know men and their ego. There's no small man whether big or small, rich or poor. I've learnt never to touch their ego even when they want something I can't give them. I ward them of carefully and politely tell them I can't afford to give to them what they want. I try to make them know that I appreciate them but can't handle every man that comes my way.

Men are like babies and you need to handle them carefully so they don't get pissed off.

I'm into interior decoration. I also have an NGO which is my little contribution to humanity. It's a project on kids and health which I don't like advertising. I also do one or two businesses by the corner like contracts.

Presently I'm talking with a company outside the country on a particular business but I don't like talking about certain things until they materialise.

Out of screen, who is Benita?

(Laughing) Haa... Benita is a simple Igbo Chic with no apologies, complete Igbo. She is humble and easy going. she's also simple, honest and a free minded fellow.

She is very homely. I do a lot of domestic chores and I'm someone that believes in doing things myself which applies in everything I do. If you think you can't do certain things yourself then you'll have to watch over the people doing to make sure you get the desired results.

Is she a good cook?

I really love good food, so I do a lot of cooking. I believe every woman should know how to cook.
Surprisingly there are some who can't......

Oh that means I should open a school of catering. From what you have just said it means I'm wasting a talent somewhere.

Ordinarily there is nothing wrong in the men helping out but the woman should be in-charge here. (Laughing) Please tell all those women that cannot cook to come and enrol with me.

Do you think your career has paid off?

Yes It's paid off in the past. But right now the industry is undergoing a kind of reformation. It is facing some ups and downs which is not only peculiar to Nollywood. Soon things will get fixed up again and we all will smile. Like my grandfather will always say “anything that's going on too smoothly may likely have a rough end.” The industry is facing some kind of challenges and I'm a very patient person so I'm willing to wait.

How many movies have you done from January till now?

Since January I've turned out two scripts, and I'm supposed to be shooting in Ghana in April. I'm also billed for Portharcourt again (on location) soon.

So I'm taking it easy.

Considering how many movies produced since January till now, do you think Nollywood is moving the way it should?
No. like I had earlier said, Nollywood is going through a panacea which is internal. But there is no cause for alarm, because the strong and patient will get there. Just like gold passes through fire to get refined, we are passing through the same fire and we are getting refined everyday.

Let's go back to Benita, what are the qualities of your right man?

Good qualities are really hard to come by but I'm willing to wait on the Lord. I like people who are sincere and honest. I also like a man that respects his woman because he'll equally respect and understand me. These qualities come before love, once they are there, love will naturally follow.

So who is this lucky man?

Just hang on and be patient. There's no need letting the cat out of the bag yet. Soon everything will unfold naturally.
Once Nzeribe is mentioned, everybody thinks about Oguta, are you also from there?

No. We have Nzeribe in Awo Omama, Oguta and Ihiala. I'm from Ihiala.