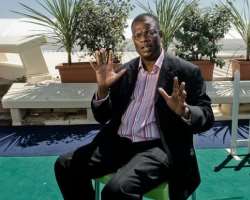 As if to say that he felt the pulse of the generality of practitioners of the film and video industry, President Umaru Musa Yar'Adua two weeks ago approved the re-appointment of Mr. Afolabi Adesanya as the Managing Director/Chief Executive of the Nigerian Film Corporation (NFC). Adesanya's re-appointment for another four years' tenure, which became effective from March 2, 2009, was conveyed in a letter signed by Prof. Dora Akunyili, Honourable Minister of Information and Communications. Akunyili congratulated Mr. Adesanya for his re-appointment and commended him for his contributions towards the repositioning of the Nigerian motion picture industry. A filmmaker and photojournalist, Adesanya is widely believed to have brought tremendous changes in the operations of the NFC since he assumed office as the Chief Executive of the nation's film agency four years ago. Observers of the industry also say that he has been able to reposition the sector in line with international standards. Critics say that Mr. President did the right thing for re-appointing Adesanya who is a celebrated film director. They say that his re-appointment will no doubt strengthen existing relationships within the industry and put the industry on the path of sustainable growth. In this encounter with SHAIBU HUSSEINI, Adesanya promised a commitment to consolidate on previous achievements. Excerpts:

ON the re-appointment: "First and foremost, I feel extremely grateful to God and to President Umar Musa Yar'Adua and my Honourable Minister, Professor Dora Akunyili for the opportunity to serve yet again. And of course, all the people God used to make my re-appointment possible. I consider it recognition of the modest contributions that I have so far made in the industry. And all this contributions were made possible by government support and the goodwill of people within and outside the industry. But more than anybody else, I was psychological prepared to just pack my bags and return to the field aware that it is a political appointment. But my confidence really was that one has, through the help of God and the support of people within and outside the industry, done his part and it was now a matter of whether to keep him to continue the good work or ask him to go. But quite frankly, I looked back at the first four years and I looked at all the initiatives and programmes and the infrastructural development, honestly, I would have just moved away, my head up-high, thanking God, thanking government for giving me the opportunity to serve. Because one had had the opportunity to improve tremendously what I found on ground."

Looking back at previous decisions: I bought a bicycle three years ago and I can sell it to you as a brand new bicycle. Reason is that I don't have the time to ride it unlike my son. He has his own bike. On a more serious note, generally when I pray, I pray to God to give me knowledge, wisdom and understanding and to always inspire and motivate me and for that I am extremely grateful. But by and large, my decisions are informed and guided by government policies and directives. On the whole, I think I have run the Film Corporation as humanly possible for any human being to do. We took off with the re-branding of the biennial National Film Festival as Zuma Film Festival, the push for the establishment of the Motion Picture Council of Nigeria (MOPICON), the National Film Development Fund, the National Film Grant, review of the National Film Policy, physical and infrastructural developments at the Nigerian Film Corporation and the National Film Institute namely, the acquisition of 35 mm Cine Camera, the Dry Printers for 35 mm, the Colour Analyzers, the construction, commissioning of the Still Photo-Laboratory, three-in-one Cyber Caf�/Bookshop/Canteen Block, the Ultra Sound Stage, the 300-seat Terrace Auditorium, construction of Administrative Block, all at the National Film Institute Jos, the annual SHOOT! Professional-capacity training programme, payment of compensation for the Corporation site at Lamingo, construction of male and female hostels for the National Film Institute, construction of multi-purpose National Film Video and Sound Archive and the tremendous assistance and support to Guilds and Associations and local film festivals and television markets. And you see the barrage of text messages, letters from the staff of the NFC and industry people, emails from embassies and other observers has shown that we enjoyed the goodwill of people and that means that you are doing something that they appreciate."

Has he gone rusty? "On the contrary, you can entrust your productions with me. I have worked for so many years. I ran my own production company for 14 solid years. I worked with several people on productions. So definitely one cannot go rusty to the extent that it would affect his nerves. You know in our business, the older you grow, the more you mature on the job and the more confidence you have. I still keep an eye on one or two productions you know. So I cannot get rusty. You can trust me with your production and you won't be disappointed. But you see the issue will be the fear that people who want my services may not be able to afford me after I finish from here. So really, the issue is with the people out there. Can they give me a chance and not bother if they can afford to pay me or not. They should just pay me the going rate."

Nollywood breaking-in internationally: "Yes, of course. Unfortunately now, most proposals I get are something akin to Slumdog Millionaire. It's a wrong attitude. We need to be original. And really if you look at it, you need to come up with something that is indigenous to a place for people to accept it. Yes, Slumdog Millionaire could have been situated in Nigeria and it would still have won the Oscars, may be because it is fundamentally a human angle story and, of course, the rag to riches of the underdog. So, it would have worked anywhere else. So, what this tells us is that we need to begin to work on stories that have global resonance that can win us an award like the Oscars. What we also need to come to terms with is that we can co-produce films without losing our own identity. And as a last word, I think it's just to remind them that my official doors are wide open and that my hands of fellowship are still outstretched to anyone who wants to partner with us.