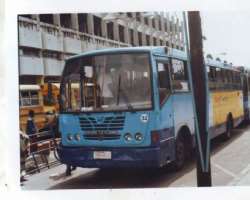 Lagos State is perhaps Nigeria's most challenging state to govern as a result of its huge population, multi-ethnic composition and renowned status as Nigeria's main commercial entity. Governing such a challenging state have tasked governors before Fashola. But the governor have in such a short time, as many would readily agree, shown remarkable courage, vision, innovativeness and purposeful leadership.

The journey to a new Lagos State began on May 27,2007 when the former Governor Alhaji Bola Ahmmed Tinubu passed the baton of power over to Barrister Fashola, as the new executive at a colourful ceremony at the Tafawa Balewa Square in Lagos, in the presence of over one million people from both within and outside the country.

During his oath of office ceremony, Barrister Fashola pledged to turn Lagos into a tourist destination for Africans, particularly in the area of infrastructural development improvement, with a focus on proper drainage system, rehabilitation of schools, beautification of roads, introduction of a new transportation system, youth empowerment programmes, and introduction and implementation of fines to ensure that Lagosians abide by laws and orders.

True to his words, in less than two years in office, the state has witnessed rapid development in the areas of Youth Empowerment, Education, provision of Health facilitis, beautification of roads, provision of free text books for school children, control of traffic, and the provision of the state-owned BRF buses.

Consequently, people from both within and outside the state, including the World Bank, have been coming to the governor to pledge their assistance both morally and financially, for the achievement of his big dream- the Lagos megacity.

Indeed Nigerians from all walks of life, and across all age groups, have been commending the governor for the wonderful developments going on in Lagos State. It is the popular belief that the governor has done in two years, what his predecessors could not achieve in eight years.