I started to play the flute at eight –Tee Mac 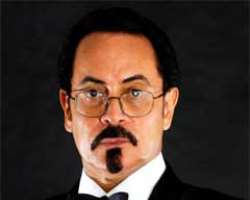 HIs name surely rings a bell in the Nigerian music circle, having been in the music business for decades during which he has produced some... remarkable albums that received world acclaim. In fact, Tee Mac Omatshola Iseli, popularly known simply as Tee Mac, has become synonymous with music, quality music as it were.

As a musician, he brings into his art a striking characteristic finesse and panache that has earned him fame, fortune and character among his contemporaries. Born of a Swiss father and Nigerian mother from Warri in Delta State, the ace flutist flutist and composer of Philharmonic music literally dumped a degree in economics to pursue a life time career in music. And today, for one who in 1973 had two world hits which he said set him up financially for the rest of his life, he has reasons to say: “I am very grateful. I have a very interesting and successful life. And I have been to various parts of the world. I have performed for kings and presidents, for beggars and for everybody. I hope I have the chance to make more people happy.”

His career as a musician did not come by accident for at a very tender age, he knew he was going to be a musician. But there was something spiritual about it, as he disclosed to the Nigerian Compass on Saturday in an interview recently.

I grew up in Zurich where I did my primary and secondary. I was about five years old when I knew I was going to be a musician,” he said. “I seem to remember and it was always in my head that in my previous life I played some flutes. When I was six years old I had a favorite melody and it was called A Little Night Music by Mozart. I fell in love with it. And I started to read about Mozart's life. Mozart was already a great performer at the age of five. Now I was six and I always wanted to play the flute. I asked my uncle who took care of me in Switzerland if I can have a flute. So at Christmas I got my first flute as a present. I love my flute so much I wouldn't even sleep without it. The flute will be in the case under my pillow. But at that time to learn how to play the flute there was no other way than to go through the classical training. It's not like today where you can go to Trinity College or the Barcley School of Jazz in America. You have to go to the classical education because that's the basic for music education. I started to play the flute at age eight. The flute is the most beautiful instrument to learn and the most beautiful instrument to play. Apart from flute, I play guitar, I also play saxophone. But now I prefer to just concentrate on the flute.

He believes that music should be part of every child's education because, according to him, “it creates awareness, an appreciation and an understanding which will be lacking if the child did not grow up with music. Even if the child later on turns to jazz or pop music, the classical education is the main thing.”

Interestingly, for the Tee Mac, it takes more than just interest in playing the flute to be a successful and top class flutist. “It takes madness, it takes stubbornness,” he said. “I don't know. It is you believing that you can, at some point in your life, you can master something, and through that master what you have been trying your whole life. It is when you dedicate your whole life to the perfection of something. You realize that may be you have a birth vision that you came to this earth to do something specific. And in my case I believe I came to play the flute, to give pleasure to the people around me, I'm motivated by a dream I had as a six-year-old, which is that one day I will be the greatest flute player on this earth.” he enthused.

“My advice to young musicians is learn your traded; learn how to read and write music. Be a professional if you are not a professional you will not make it. A good musician always makes money. And if you are learned in music you will be able to play anywhere in the world because you speak the same language with the top organisations worldwide,” he said.

“In music success is 95% hard-work and 5% glamour people don't know that before you can that flute you spend twenty years playing six to eight hours a day. It is not something you just put in your mouth you have to get it right; you have to work hard. I have a couple of hit tracks.”

Asked how many albums he has released so far, he smiled and said: “I don't know. I have to count them. Honestly I can't remember because I have collections of classical album. My first album was released in Switzerland when I was 18 years old, but my first album in Nigeria titled Party Fever was released on Scala Records of Chief Aboderin of Punch in 1976. And I later did Mixed Grill. I also did an album with Swedish Piano super star called Blind Date. And ever since I have been releasing albums. I still have several unreleased philharmonic music in my studio. My last album was released August last year titled Just like A Dream. I have ten hours of finished music in my recording studio. I have an unpublished classical ballet and a symphony called Rule the World.

I didn't do too many here in Nigeria because my recordings are very expensive. I spend hundred thousands of dollars on them. So I have to make my money abroad and make it fast. My music is for the whole world, not just for Nigerians,” Tee Mac asserted

For classical music you must go to the university to study it for eight to twelve years, and I did that. And playing in a philharmonic orchestra is the absolute top of music.”