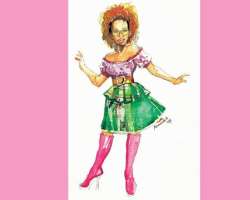 In the interest of full disclosure, let me begin by stating that I don't appreciate Nollywood movies (a.k.a. “home movies”) at all. But before the “lack of patriotism” card is waved furiously at me, please understand that I have very little patience for movies generally and would much rather curl up to a good book any day.

Despite the gazillion Oscars and fantastic reviews that “SlumDog Millionaire” received, and despite the numerous opportunities to purchase a pirated copy for N350 in Lagos traffic, I am yet to watch the movie.
So now with apologies over, let's get to it.

There is really no good way to spin this, so if you are someone who believes that Nollywood stars are fashionistas in their own right, and that their costumes are spot on, then you might like to close this page, and proceed to other reading material.

If you've read my last two “Passion for Fashion” pieces, you're probably wondering who this highly opinionated person is, and who died and appointed her the Fashion Police. Well it's a tough job, but someone's got to do it, right?

With full-length films being shot with just one digital camera, some with budgets as low as $15,000, many
Nollywood movies are produced with the express intent of recouping investment money as quickly as possible. As such, you can be certain that a budget for wardrobe and costumes does not rank very highly on most Nollywood producers' list of priorities.

With the exception of movies set in rural communities, or characters that depict royalty or warlords, many actors and actresses are simply expected to provide their own clothing. A source reliably informs me that many borrow clothes for the roles without guidance or direction from the film-makers. No wonder!

It would be quite frankly an injustice to talk about fashion in Nollywood without mentioning the stratospherically popular movie “Jenifa.” I know I said I don't do movies, but I succumbed to this one and yes, it cracked me up. I don't know about replaying her jokes or diligently viewing it over and over again though.

It's much like the disdain I have for people who watch reruns of old series. I mean, at one point in my life I was practically addicted to the British soap opera, Eastenders - but to watch old episodes on BBC Gold? What on earth for? Live for the future, I say! But I digress.

That classic scene where Suliat/Jenifa struts across her campus in pyjama-bottoms and knee-length
boots resonates because it accurately embodies the self-confidence of the average Nigerian woman. Whether we feel 'baffed up', whether we actually are, or whether we have committed the most heinous fashion crimes ever, we carry it all off with an amazing swagger, a swagger that makes (almost) any sin forgivable.

Were this overwhelming confidence to be bottled and sold, it would be a serious money spinner. Not to make this a thesis on Jenifa, but when the more 'hip' girls on her campus point out to the heroine that beauty marks, a-la Indian movies, are out of fashion, she initially regards their well-meaning advice with disdain.

In her mind, they must definitely be wrong. It is this same brand of confidence that causes actresses in other Nollywood productions to don leather trousers, or thigh-high leather boots…or both! The same (misguided) confidence is responsible for their funnylooking weaves and eyebrows penciled in bright red.

It's a somewhat different story off-set though. I find that the clothing is a little less risqué and of far superior quality. Slowly, our actresses, in true Hollywood style, are becoming fashion icons to many.

So much so that there are several websites and blogs dedicated to reviewing movie stars' wardrobes, and elaborately reviewing and critiquing their red carpet appearances.

I suppose it's much like anything in life - the more you earn, the more exposure and access you have to more sophisticated influences.

Despite being criticised for bad acting, abysmal sound, implausible storylines and poor continuity, Nigerian films have become huge hits in Africa, as evidenced by the success of Africa Magic, the perennially-popular channel on the satellite TV format that serves the continent.

Poor costumes or not, Nollywood is clearly doing something right, and for that, I doff my multi-coloured, sequined leather and velvet hat!