The Death of VHS Tapes. 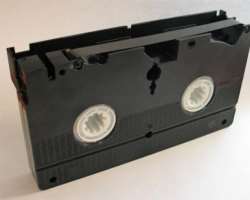 It was not so long ago when people used VHS tapes to watch movies or to tape a show. It was the start of a revolution of recording shows and then fast forwarding through commercials. It was a way of relaxing knowing even if you ran late at work your machine was recording your favorite show that you could then watch at your leaguer.

Then a few years later you have DVD players come on the scene and everybody marveled out how simple there use was and how you could jump around in a movie and did not have to rewind once the movie was done. The problem with DVD's was that they could get easily scratched and when you watched a movie you would have a jumping picture or the movie would refuse to play at all. So when you went to a video store you had to inspect the disk before you rented it. With VHS tapes the recorded video tape was protected inside the tape cassette and you knew it would at had an 80% that it would work.

As video stores started carrying DVD it was only a matter of time until no one wanted to buy VHS tapes and just wanted to buy DVD's. And it wasn't long before the death of DVD's started to happen. People started buying HDTV's and could not use DVD's to store all the data a HDTV used to show video. So along came Blue Ray and as more people upgrade to HDTV's you will see the death of DVD's. Even know DVD companies are slashing prices so people will still buy DVDs. But the problem lies with the fact that eventually Blue Ray will be replaced as well.

Right now you can go to the internet and watch shows on certain website like Hulu.com. And then you don't need even a blue ray disk or HDTV to watch movies. But watch their will come a time when computer screens will have HD and you will have to have more bandwidth to watch these shows. It seems it is only natural for people to make better and better products that we have to then upgrade top to get better sound or viewing. Even now cable companies are using set boxes that record shows and let you watch them later by using hard drives that do the recording. They are even giving you the ability to watch movies and shows whenever you want.

I look in the corner where my Video recorder sits and I still have a few VHS tapes that still work great on my TV and ponder what the future hold.

Will we all have to keep upgrading to the next item or should we try to hold on to the past for as long as it lets us?

Technology is great but it can be tiring