BOB TV has made me a star-----Bukky Ajayi 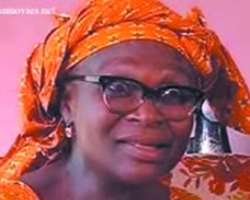 Long before now, if you call veteran actress, Madam Bukky Ajayi a star she would decline and she doesn't even thought herself to be one simply because hasn't won an award. But all that changed during the just concluded BOB TV held at Ladi Kwali's hall Abuja.

Immediately she received her award the cross-over actress sang a thanksgiving song and told the stunned crowd that it is only now she can call herself a star. In her words, “before now, if people call me a star, I tell them that I am not a star that I'm simply an actress. It is after this award that I can now call myself one because I've never received one before.”

She was recognized for her outstanding contribution to the world of make believe. Also honoured alongside her was Nkem Owoh, Lekan Ogunbanwo, one Mrs Zainab from the north for being the first African woman to handle camera, Okechukwu Paulo Ogujiafor, and Andrew Gibson from South Africa.

Meanwhile, Minister for Information and Communications, Prof. Dora Akunyili who was represented by Mr. Afolabi Adesanya, the DG of NFC says she is ready to wield same magic wand that made NAFDAC worked during her reign. She appealed to practitioners to use Nollywood platform to promote the new brand project her ministry is promoting.