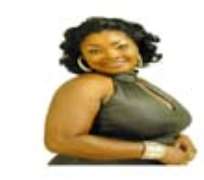 Flakky Ididowo is the moniker for Ronke Odusanya an actress in the Yoruba language sector of Nollywood. She is also widely known as Becky for her performance in the award winning flick, Jenifa.

It was indeed with much expectation of who the personality behind these two stage names-Flakky Ididowo and Becky-really is that Klieglights set out for this encounter with her.

Clad in a colourful top and a big white towel in her hotel room-where she was getting set for action at a location-she settled down for the chat as she busied herself with her laptop.

As if doubting what format the chat would take, she asked, "What is this interview all about?"

She heaved a sigh of relief after getting assurance that it would focus on her life and career.

The bosomy Ronke, who is a graduate of the Olabisi Onabanjo University (OOU), Ogun State, couldn't help but lament the pains of being a star actress.

"Stardom could be cool, but sometimes, it could be funny. Funny in the sense of invasion of privacy. Sometimes you don't own yourself; you have to be out of your shell because of the audience and fans.

"Most of the times, we get to see the beginning of something but people can't tell how or where it will end. Back then, all I wanted to do was act, showcase the talent in me. This is because I've been acting since my childhood and those that know me very well can testify to this. So, when I started, all that mattered to me was just to exhibit my talent and nothing else," she said still stroking her laptop.

Unknown to many, she began her incursion into the movie world nine years ago in the English language sector of the Nigerian movie industry.

"I was told by my mum that I had always loved acting from my nursery and primary school days. My mum said whenever there was a cultural dance or play in school, my teachers would go out of their way to show me off to the crowd by placing me on a table then people would wander in amazement, who my parents are.

"But (in) my primary school days at St. Benedict Nursery and Primary School, I used to take part in cultural dance and drama. I proceeded to the Federal Government College, Akure where everybody knew and referred to me as the Black Queen for my acting skills. In my university days at the Olabisi Onabanjo University, I was usually called Ronke or Moremi and I did a lot of stage plays.

"I got into Nollywood in 2000. I started with the English speaking movies. I did a flick with late Francis Agu and featured in some soaps like, Harmony Estate. But it wasn't easy because I was an up and coming act, who is also Yoruba and I found it difficult getting scripts.

"It got more annoying at auditions or screenings but I really didn't mind because my interest kept me going and at a point, I got tired. However, in 2002, a friend of mine, Mistura, who is known as Adepate and Baba T, met one of our classmates from the university, who is also Adebayo Salami's son, Sodiq Adebayo. It was then that things turned around for me.

"We told him our plight and he introduced us to the Awada Keri Keri Organisation, run by his father, Iya Awero and Aluwe. We got registered and went for regular rehearsals and that has been it," she said.

For many fans, Ronke became the darling of viewers after her performance in the flick, Flakky Ididowo by Fathia Balogun. Then came her role as Becky in, Jenifa.

"I really don't know what gave me my break. I just knew it happened. So far, I have been able to do good movies and I can't say one gave me my break because you feel impressed by every new flick that you do," she said dramatically.

"I'm just so happy and appreciate the people that have helped me grow by giving me roles. People like Adebayo Salami and Ronke Oshodi Oke, who gave me my first two jobs in the Yoruba speaking industry, were God sent because they gave me two lead roles without seeing my acting skills!

"Baba Ologba and Modalayo were my first two major roles and first two jobs in the industry. They were lead roles. Flakky Ididowo too, which Fathia, my sister did, further shot me into limelight because before Flakky Ididowo I was relatively known as Ronke Aco. But immediately after the flick, my name sporadically changed to Flakky Ididowo, then Becky in Jenifa. All the same, I believe I am still going to do films that would surpass these ones," Ronke said.

Knowing the meaning of Flakky Ididowo (Flakky, the lady whose butt makes money), and the alleged embarrassment meted out to her by a fan sometimes back, Ronke still feels good being tagged Flakky Ididowo.

Laughing hysterically, Ronke said: "Well, some of my friends in the corporate world do not like that name. I respond whenever I am called Flakky Ididowo because that is my profession. In fact, I tell my friends 'if I didn't want to (be called that), I wouldn't have acted in the movie in the first place.' Sometimes when I am driving people go about shouting Flakky Ididowo; others would rather call me Ididowo. This could sometimes be a blessing particularly when you are outside the country and someone sees you and says 'kindly accept this gift for your acting skills' or 'Hi Flakky, I like your acting prowess.' In all, it's been wonderful," she said with a playful smile on her face.

One thing that has consistently amused fans is Ronke's ability to conveniently distinguish herself from her provocative and promiscuous roles in movies that have endeared her to viewers and several men.

"I am not Flakky Ididowo. That's definitely not me. After Flakky Ididowo, I met some people, who didn't know me and couldn't help but confess that I don't sound or act like Flakky and I tell them that character, Flakky Ididowo is just a character that I acted, it doesn't have anything to do with my personality. I'm a very religious person and so the things I do in front of a camera are just exhibition of my skills.

"But some of my roles are just me. Like when I did Eni Ijaoba by Fathia Balogun, the character I played was that of the patient wife of an irresponsible man. I could play it very well."

Judging from the way men swoon over this sultry actress, there is no doubt she has a special guy in her life. But how her man handles this pressure from men is another thing that has kept her going.

"I get advances from men. That cannot be taken away. Definitely, I'm in a relationship and he is loving, caring, and understanding and of course, very romantic.

"I'm sorry I can't say much about my relationship but sooner or later, people will get to find out who he is.

"I have not really thought of leaving acting for my fiancee, if he insists after we get married! I really don't know, but when I get to that bridge, I'd cross it!"

Ronke said she would be tying the nuptial knot before the year runs out God willing with this man of hers!