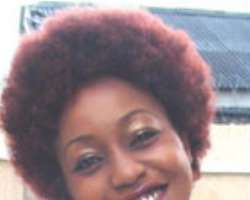 Delectable actress, Rita Dominic, made an appearance at the Victoria Island office of Multichoice during the week.

Rita, who looked radiant with her trademark red lipstick and cropped up hair, wore a tee-shirt top over a hip hugging black pants.

The actress was all smiles as she posed in front of the company's billboards, inside the complex, for photo session. She later took photographs with some fans outside the complex before leaving.

It was gathered that the beautiful actress was at the office to tidy up some business deals.